Drivers won’t be able to use 100 Avenue to get to the west side of Grande Prairie for at least the next two weeks. The entire intersection with 102 Street will be closed starting at 7 a.m. Tuesday morning.

It was originally expected to take 14 days for crews to upgrade the water and sanitary sewer in the area and instal a new storm sewer. The timeline is now pegged at three weeks, but Monty Haughian with the City says they’re still hoping to get it done in two.

“Weather is definitely a factor in that process,” he explains. “We get downpours when they’re excavating and it turns into mud holes, which is unsafe, and then they can’t complete and get good compaction on their work.”

Traffic will have to use 116 Street, 108 Street or 84 Avenue to cross the city westbound in the meantime. Eastbound traffic won’t be affected.

The next major closure for downtown rehabilitation will start this Thursday. Haughian says the City just got word that the closure on 100 Avenue will extend to include 100 Street to 101 Street.

“The fencing will go up and the contractor will be removing the street lights, the street furniture like the garbage cans, bike racks and plant holders, in preparation to start the work on the next block to the east.”

The road is already closed from 101 Street to 102 Street so Haughian says the current detour won’t change much. Drivers won’t be able to use 100 Avenue west of 100 Street, so they’ll need to use other routes off of 100 Street.

That block should be shut down until the end of construction season, which is pegged at October 15th. Haughian encourages residents not to forget about businesses in that area.

“It is tantamount to know that these businesses are open and do require people to come and help them out in this downturn because of the construction. They’re definitely open for business and ready to go.”

Pedestrians can still make it around the intersection at the base of 214 Place using the west side of 102 Street. Work is being done above and below ground. 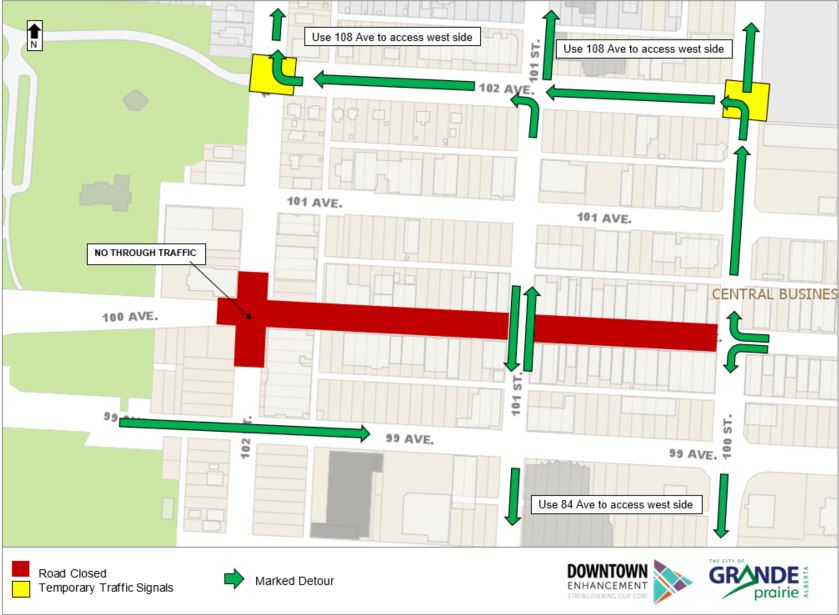