RCMP want to identify two men after a break and enter in the Bezanson area.

RCMP say two men broke into Lefty’s Cafe and the Bezanson General Store just before 6 a.m. May 9, 2018. According to police the men broke a window to the building then took a “significant” amount of alcohol and tobacco.

Anyone with information is asked to contact RCMP or Crime Stoppers to remain anonymous. 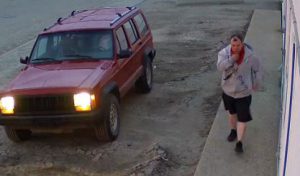