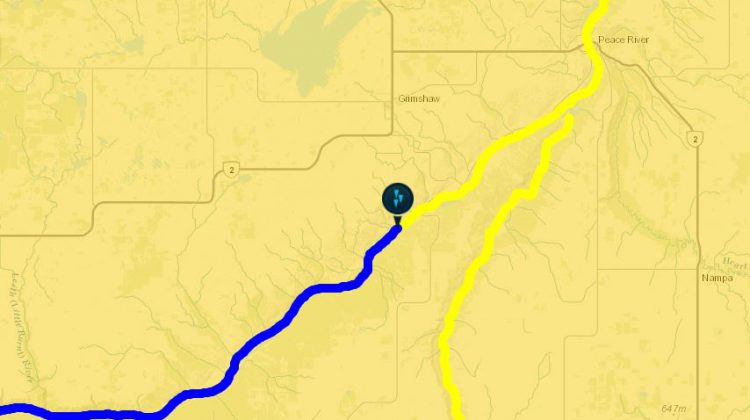 The location of the Peace River ice front as of April 10, 2018, Alberta Environment and Parks

It’s expected the Peace River breakup will happen in the town later this week. Alberta Environment and Parks has issued a River Ice Advisory, as it mean will mean water and ice levels could fluctuate rapidly.

The ice front is moving through the town later than usual this year, due to cold temperatures in late March and early April. As of Tuesday morning, the Peace River ice front was roughly three kilometres upstream of the Shaftesbury Ferry and 28 kilometres up from the Highway 2 bridge.

As it’s gotten warmer out, the province says the ice should be moving around seven kilometres a day, meaning the breakup should happen in the town between Thursday and Friday. Water levels aren’t expected to rise significantly.

Meanwhile, the snowpack in the Smoky River basin is well above average, and the ice cover on the Smoky and Little Smoky rivers are still intact and haven’t affected the Peace River.