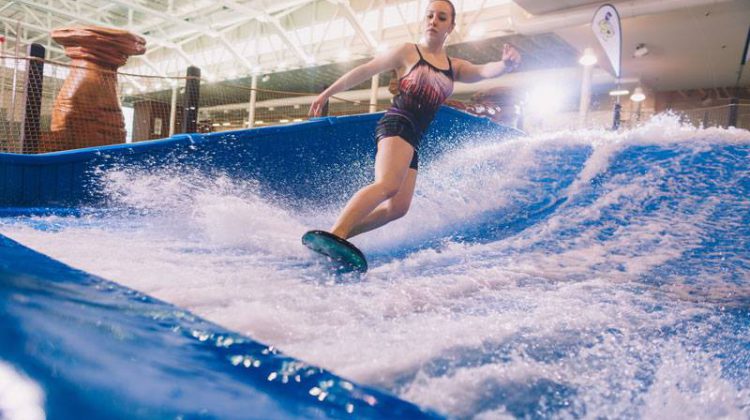 The FlowRider at the Eastlink Centre is now free of charge, Facebook

The Eastlink Centre is looking to regain the trust of the community following a lifeguard shortage that caused major schedule changes and headaches in the aquatics area. While previous reports indicated staffing levels had dropped from more than 65 lifeguards to 58, newly hired General Manager Jim Weller says they were down to just nine in March or April of 2017.

Because of the shortage, open swim times were limited to a couple hours a day, parts of the facility had to stay closed, and capacity was quickly reached. Weller says they now have 99 lifeguards employed, and had 98 per cent accessibility at the facility by the end of September.

“Basically we did it by doing what we said we were going to do; what we’re supposed to do in the first place. By getting those guards back on staff and training them, that was important for us to have people come in and say, ‘oh, we can do this now?’.”

The City of Grande Prairie brought on Weller as GM last fall, following the departure of Eastlink Centre assistant general manager Carol Longmore and community living director Garry Roth. Prior to the lifeguard issue, a nearly $3 million deficit was discovered in 2014, as a result of incorrectly reported revenues and over budget expenditures.

Weller says he and the city know they lost the trust of residents, which was evident in a “significant” drop in memberships in the spring of 2017. In the three months since he arrived, memberships have rebounded by an estimated five per cent, and the new GM says he’s working to change the culture in the building.

“Put the accountabilities in place and really hold people to those accountabilities. I think it’s important that you’re meeting with your staff on a regular basis and you have a pulse of what’s going on; if you’re not… having those meetings and you’re not walking about talking to members, you don’t have that pulse.”

To entice new members, the Eastlink Centre is now offering two week trial memberships until February 16th, and making sure to follow up with everyone to see if they want to sign up. In the first four days, Weller says 1,041 people took advantage of the offer, which he calls “outstanding.” The anniversary sale also broke records, outselling 2016 by roughly 15 per cent.

PlayCare is now free of charge for parents, and use of the FlowRider is also now included in memberships. The surf simulator previously brought in around $15,000 a year with little use, and is now considered to be a value added benefit. Memberships can also now be paid one month at a time.

“Families is a big part of who we are,” says Weller, “and it’s a big part of this community. We want to be a part of it and be a solution versus a problem.”

PlayCare has been moved to the space previously occupied by Ernies Sports Experts at the south entrance, and the Jungle Play Place is being relocated there as well. Part of the wall has been knocked down and replaced with a window, creating a social space with couches for parents and caretakers in the main hallway.

“People join fitness clubs because of certain reasons, health reasons, but they stay there because they develop friendships,” explains Weller. “Our job is to facilitate those types of friendships, and what better way than bringing families together at the jungle gym?”

Weller admits the Eastlink Centre team still has a long road ahead, but maintains they’re taking aggressive steps to make sure the community is proud of the facility.