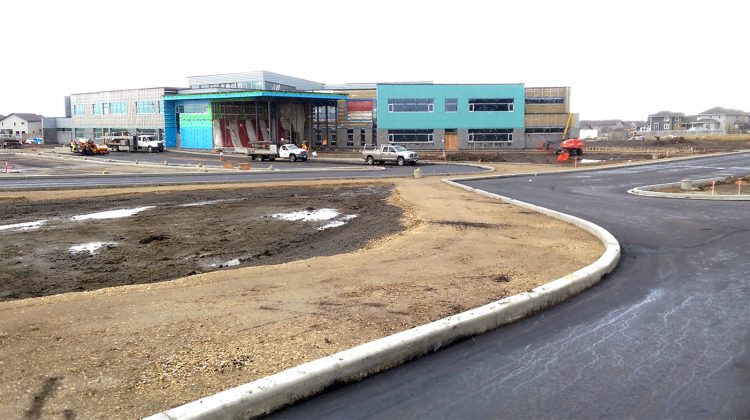 Construction of Whispering Ridge Community School as of October 25, 2017, PWSD

Future Whispering Ridge Community School students won’t be moving into their new school until after spring break. A new projected opening date has been set for April 9, 2018, due to poor weather and a lack of skilled workers.

Facilities Director David Michalko explains that the recent upturn in the economy has meant not enough people working in electrical, carpentry, mechanical and civil engineering.

“The early stages of the project were hampered by weather conditions, further compounding construction delays caused by trades shortages. However, the two month delay is minor when the combined impact of the economic and weather factors are taken into account.”

Construction has only been pushed back by those two months, but the school division wanted to wait for a natural break in the school year to make the move. PWSD Superintendent Sheldon Rowe adds that there’s no point in moving students in before construction is complete.

Once open, Whispering Ridge will take pressure off of Harry Balfour School, which is bursting at the seams and on the province’s sunshine list for a replacement. Roughly half of its students will be moving over to the new K-8, and they’re already grouped together.

“Harry Balfour School is a close-knit community that has always put students first,” says Whispering Ridge Principal Shawn O’Shea. “WRCS, when it opens, will reflect the same ideals. While the delay is disappointing, our focus remains on making the school year as successful and rewarding as possible for our students, parents, and the communities we serve.”

The school was first announced in October 2014 and given approval by the education minister just under a year later. The plan was to open in the fall of 2017, but that moved to January 2018 when the construction tender was awarded.