All incumbents re-elected to County council 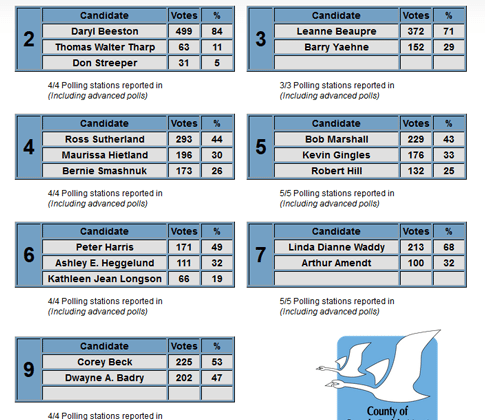 Joining them as the sole newcomer this term is Linda Waddy. She earned 68 per cent of the vote in Division 7, besting Arthur Amendt. Incumbent councillor Brock Smith didn’t run for re-election.

Council will be rounded out by Division 1’s Harold Bulford and Division 8’s Karen Rosvold, who were acclaimed. In total, just more than 3,400 votes were cast across the county, which is 21.4 per cent of eligible voters.

All the results at this point are considered unofficial, and will be verified by noon on October 20th. Once the candidates are sworn in, they will elect a reeve and deputy reeve on October 23rd.