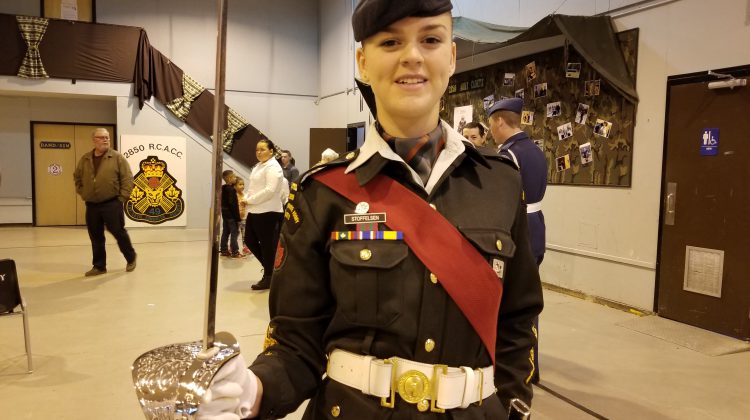 A local Army Cadet has been recognized as Canada’s most outstanding. Chief Warrant Officer Clarissa Stoffelsen of the 2850 Royal Canadian Army Cadet Corps was presented with the 2017 General Walsh Commemorative Sword in a ceremony Wednesday night.

The sword is considered the highest national prize for any Army Cadet, and the 17 year old from Sexsmith was chosen from hundreds of other nominees based on her experience, determination, fitness, exemplary record of service and high level of personal discipline. She says the honour is higher than any she’d ever hoped for.

“To think about all of the hours and frustration and everything you put into the program, and then to get something like this out of it, it’s really rewarding.”

Stoffelsen joined the cadet program in Ontario when she was 12 years old, and continued in Grande Prairie when her family moved. She says it’s been the best five years of her life.

“The program itself has been great; I like the discipline and the schedule, the regiment, the award system, but obviously the travelling has been a big bonus for sure.”

In addition to trips to various parts of Canada, Stoffelsen travelled to Chile in February for a hiking and kayaking expedition, and spent part of her summer on a history tour of England Belgium and France. She’ll next head to Ottawa as a guest of the Royal Canadian Legion to take part in the November 11th Remembrance Day ceremony at the National War Memorial. She’ll also meet both the Governor General and Chief of the Defence Staff at Rideau Hall.

Presenting the teen with her customized sword was Brigadier-General Ray Romses, Colonel Commandant of the Royal Canadian Army Cadets. He calls the award a great honour.

“We have hundreds of young, great army cadets who are absolutely outstanding, but she’s the best of the best. It’s a real feather in the cap of Grande Prairie and of the Grande Prairie Army Cadet Corps.”

A Walsh Memorial Sword is also handed out each year to the most outstanding Sea Cadet and Air Cadet in Canada. There are roughly 85 Army Cadets in Grande Prairie and 135 in the Air Cadet Squadron and Romses expects they will be inspired by Stoffelsen’s success.

“She is a wonderful example for the other cadets. They can achieve whatever they want in life if they put their minds to it, and I’m sure that we will see big things from Cadet Chief Warrant Officer Stoffelsen as she continues to develop into a young adult.”

Stoffelsen is taking a year off after high school and is looking into becoming a doctor or a nurse. While she could join the Canadian Armed Forces, she’s also considering becoming a Cadet Instructor Cadre to train other cadets and work as a civilian.

While she prepares for her next steps, she has one piece of advice for anyone looking to follow in her footsteps: set small, achievable goals.

“Goals are a huge part of the Cadet program and it’s a great habit to make. You might have a huge end goal, but always remember to set little goals to keep you on track in between.”