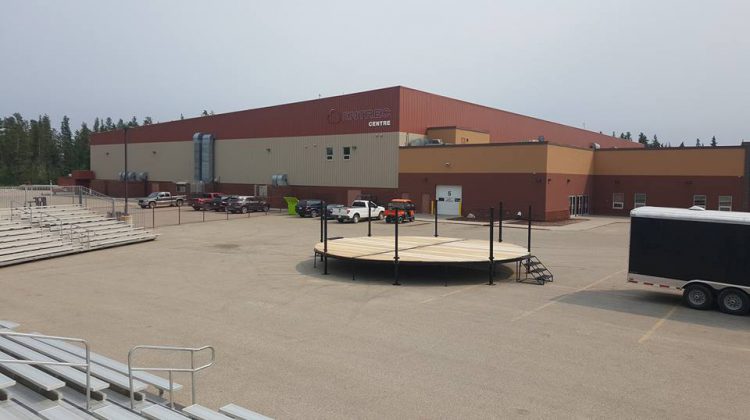 Preparation is underway for XFFC 15: Heat Wave in the parking lot of the ENTREC Centre, Xcessive Force FIghting Championship, Facebook

For the first time ever in Alberta, a mixed martial arts show will be held outdoors this weekend in Grande Prairie. Xcessive Force Fighting Championship: Heat Wave will be back at the ENTREC Centre Saturday, but it will be held in the parking lot instead of inside.

“Nobody wants to venture it based on weather,” explains promoter Darren Cliffe, “but I’m a risk taker and I do have a backup plan so we’re going to take the risk, and according to the weather it’s going to be amazing so I expect Heat Wave to go off just like I planned.”

Cliffe says he had considered other outdoor locations, but landed back at Evergreen Park because of the option to head indoors should the forecast have not been in his favour. As for the night of, Cliffe doesn’t expect many issues other than some cage maintenance if wind blows dust on it.

“When I went to the [Combative Sports Commission] about it they had a lot of concerns, but the fact of the matter is, the concerns are for both fighters so it equals the playing field. If it’s windy, it’s windy for both fighters; if it’s sunny and the sun’s in an opponent’s eyes, it can be in the eyes of the other one too.”

If successful, Cliffe says he’s heard interest from the City of Grande Prairie about making it an annual event, potentially in the parking lot of Revolution Place so the arena is there as a plan B.

When preparing a fight card, Cliffe is often left with last minute cancellations, but he says none have been weirder than Zaineddin Al Aalak. The Calgary man has been accused of killing his father and dumping his remains at an Okotoks construction site, and is a current resident of the Calgary Remand Centre.

“We’re dealing with people we don’t know and we don’t know the whole situation,” says Cliffe. “It kind of floored me a little bit, but was I surprised? Not really. In this business I’ve learned that the unexpected will come and kick you in the face and that’s exactly what it did.

Cliffe says Al Aalak had never fought in a cage before and hadn’t gotten his paperwork in before his arrest. A replacement has been found for his opponent, Grey Patino of Grande Prairie.

All but two of Saturday’s fights feature at least one local athlete, and an amateur title is on the line. Cliffe says the bout between William Quintal and Randy Mahon of Grande Prairie will be another to watch as they fight at a catch weight of 160 pounds.

“They legitimately don’t like each other, so they put a stipulation in their match that the winner takes all, so one guy goes home with all the money, the other goes home with nothing.”

The main event pits GP’s Alex Martinez against Brandon, Manitoba’s Damian Johnston. Both are undefeated, so one will be leaving with their first loss.

Tickets are still available for the event, which starts early on July 29th at 5 p.m. Doors open at 4 p.m. They can be bought at Tommy Gun’s, S3 Boardshop, Mighty Peace Harley-Davidson and www.evergreenpark.ca. VIP tables can also be booked through Darren Cliffe at 780-876-4652.

Cliffe reminds attendees to come prepared for the outdoors with sunscreen and bug spray.