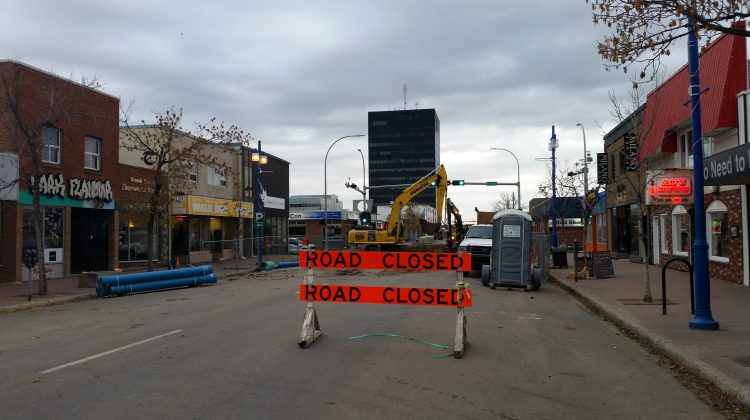 Excavation work downtown is expected to start up again on Saturday. Crews are finishing up the first phase of the downtown rehabilitation project, after poor weather last summer led to delays.

“A lot of that infrastructure was put in in the 30s… we can not do major upgrades, major new projects; the infrastructure could not support it, so replacing that underground is vitally important.”

The first phase wrapping up is along 101st Street from the CN Rail tracks to north of 102nd Ave. Phase two will then take construction to 101st Avenue from the Golden Age Centre to 100th Street.

All businesses downtown will stay open, and Rice is urging residents not to forget about them once construction starts up again. She says the contractor is working one-on-one with those affected, but it will be for naught if there’s no foot traffic.

“We believe it’s short term pain for long term gain, but it can be less painful if the business traffic remains stable.”

The intersection of 101st Street and 101st Avenue will close to vehicles Saturday. Traffic can still use 101st Ave from 102nd to 100th Street, but is being moved in a cul-de-sac at each intersection with 101st Street.

Project Technologist Conor Coney says Wapiti Gravel Suppliers will be starting some drilling work in the area Friday, but there should be much disruption to traffic. Parking on 101st Avenue will be reduced during construction this summer.

“I think we’ll get phase one and two all completed,” maintains Rice. “I’m fairly confident that they’ve set a schedule that’s realistic.”