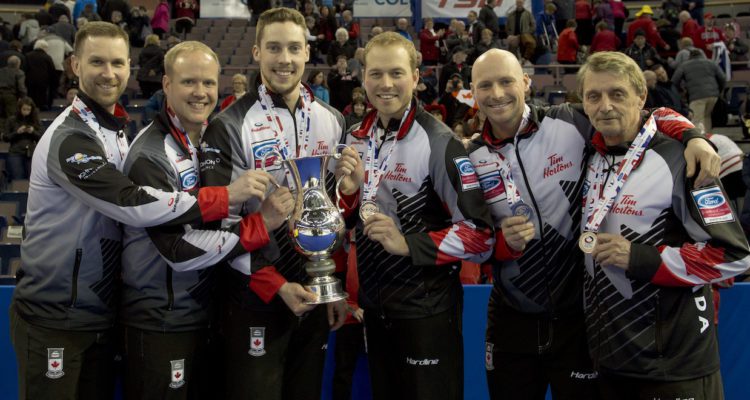 What happened after Team Canada won the gold medal at the world men’s curling championships is mostly a blur for Tom Sallows. The Grande Prairie curler was in Edmonton as fifth for the Brad Gushue rink, and says the team was confident they had the win before their skip threw his last rock.

“He’s so good and he’s so steady and with the performance he put on all week, you just never doubt him, and it was a fairly easy shot, especially for someone of his calibre. So as it was coming down the ice we’re just all watching his reaction; you could tell the way they were telling to sweep and as his arm went up it was just elation.”

Adding to the celebration was the fact that Sallows got to watch his longtime friend and teammate Geoff Walker of Beaverlodge realize his dream of becoming a world champion. Sallows got to curl one end of the tournament, but says his role was more important behind the scenes.

“Keeping a routine going, more than anything. Just keeping everything loose, and anything to ease those guys’ week and making sure they’re getting the maximum amount of rest; kind of shielding them from too many distractions, whether that’s media or fans.”

Sallows also spent every night scouting rocks, and was keeping an eye on others teams’ play.

For the local curler, returning to the world men’s curling championship also meant taking care of unfinished business. He was an alternate for the Pat Simmons rink that won bronze at worlds in 2015.

Sallows hopes to stay involved with the Gushue rink in the future, and would be happy to join them at the Olympic trials and Continental Cup. Otherwise, he plans to spend some time resting to heal his own body.