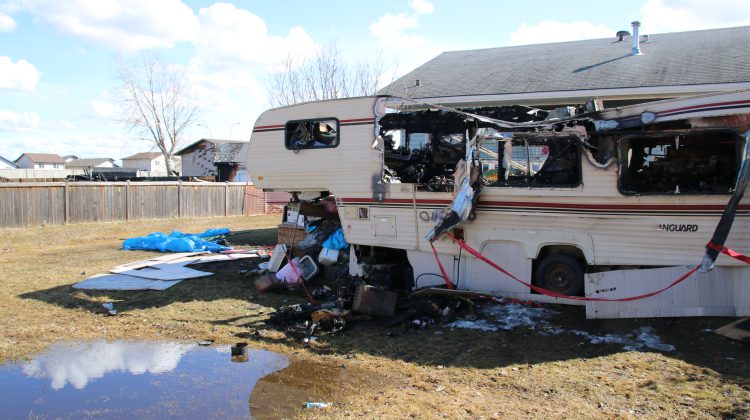 The remains of a home in the Smith subdivision and the damage done to its neighbour can be seen from the scene of an RV destroyed by fire early Sunday morning, Erica Fisher

Grande Prairie RCMP are investigating a fire that destroyed an RV in the Smith subdivision early Sunday morning. The fire department was called to the trailer around 1:15 and it was fully engulfed in flames by the time they arrived.

According to neighbours, someone had been living in the mobile home behind the house at the corner of 95th Avenue and 92A Street, but no one was inside at the time of the fire. No injuries have been reported.

Both the fire department and RCMP have finished their investigation into the cause, but haven’t released any information. Any further updates are expected to come from police.

The house the RV was parked behind is next door to a home that has burned down twice in the past year. It was first destroyed by flames in August 2016, and was being rebuilt.

All of the structure, other than the garage, was then burned down early in the morning of April 1st. The cause of that blaze is still under investigation, and the first was believed to be sparked by an electrical issue.

There’s no word yet on whether or not there is a connection between last weekend’s fire and Sunday’s.