Brier win like a fairy tale for Geoff Walker 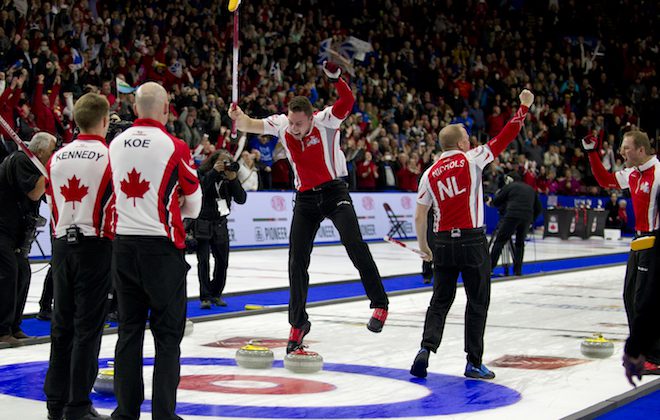 The year’s Brier had a storybook ending for Team Brad Gushue, but the last draw was especially intense for lead Geoff Walker. The final was a re-match of last year against Kevin Koe, but due to a shoulder injury, the Beaverlodge product couldn’t sweep like normal.

“I was just trying to make my shots and judge the weight as good as I could and be as good of a cheerleader for the team as I possibly could. Watching that last rock when I knew it was a little bit light and not being able to sweep it was really tough; it was a pretty nerve-racking for me.”

Gushue’s final rock was a clutch draw into the eight-foot, just making it to win the draw and the Canadian men’s championship. The rink was hosting the tournament out of St. John’s Newfoundland, and Walker says the win was made even more special in front of a hometown crowd.

“Everybody sort of wishes for that draw to win the Brier, and that’s what we had. When we made that last draw, the roar of the building was absolutely amazing how loud it was. Just to have the support was pretty cool.”

On the other side of the country, Team Gushue was getting even more support from the Beaverlodge Curling Club, who threw a viewing party. Walker started out there and says he always feels the love from friends, family, and fans. For him, this win is a dream come true, with the Brier ranking even higher than the men’s world championship.

“I’ve been following that pretty much ever since I started curling. We’d always watch the Brier every year and you’d see a lot of the legends win that tankard; to put my name on that trophy is pretty special.”

Before heading to Worlds in Edmonton at the beginning of April, Walker, Gushue, Mark Nichols, and Brett Gallant first have the Elite 10 Grand Slam of Curling in Port Hawkesbury, Nova Scotia. Walker says he’ll make the trip, but in order to heal up his shoulder, Grande Prairie’s Tom Sallows will likely take his place. Walker expects with some rest and rehab he’ll be 100 per cent in time for Edmonton.