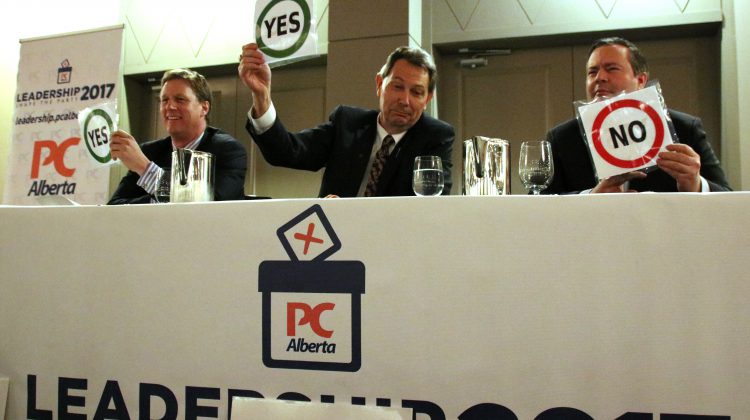 Roughly 200 PC Party members filed into a ballroom at the Pomeroy Hotel in Grande Prairie to hear from the three men still in the running for leadership of the party Friday night. While Byron Nelson, Richard Starke, and Jason Kenney took their spots at the front of the room, Stephan Khan was noticeably absent after confirming the night before he was dropping out of the race.

Moderator Helen Rice asked the candidates about why they want to lead the party and how, their feelings toward the PC Association’s volunteer board, and their thoughts on the current model of federal equalization, climate change and the carbon tax, and how to improve Alberta’s revenue. All three were united in arguing that the province has a spending problem, and not a revenue one, but where they most clearly are divided is in the path they see to defeating the NDP in the next election.

Jason Kenney essentially kicked off the leadership campaign last July when he officially announced his candidacy with a platform of uniting the right by creating by forming a single, free enterprise party. Wildrose leader Brian Jean finally answered Thursday, saying if his members want, he would be willing to step down and run for leadership of a merged conservative party. However, his endorsement came with conditions, like using the Wildrose’s legal framework, that Kenney says he’s hoping are negotiable.

“I’ve said from the beginning of this campaign in July that I didn’t think members of either party would accept folding into or going to the legal foundation of the other party… I would just ask him not to create any pre-conditions.”

When the floor was opened to questions from the audience, Kenney was accused of alienating small businesses in Alberta when changes to the Temporary Foreign Worker program were brought in 2014 when he was the federal employment minister. He defends his actions, arguing anyone who dislikes what he did but wants the NDP gone should support him in his leadership bid and then vote for someone else later on.

“We do hear from some small business people who would like easier access to temporary foreign workers, but I tell you, I’ve heard from a lot more grassroots Albertans whose sons and daughters were not getting jobs.”

Jean’s revelation Thursday afternoon came just hours after Starke laid out his plan to defeat the NDP. It was purposefully light on details, as the Vermillion-Lloydminster MLA said he didn’t want to be presumptive, but the idea was to work together with the Wildrose while remaining separate parties.

“It sounds to me that, at least at this point in time, they’re not interested in those conversations; I find that regrettable, because certainly I’ve talked to Albertans right across the province who were telling me that they understand and they agree with the problems of the merger that Mr. Kenney has proposed.”

Starke says he would not consider merging the parties before the next election. If given a mandate and a three or four year time frame, he would then look at the move.

Both Kenney and Starke brought up the idea of an Alberta Revenue Agency as way to deal with provinces like this one and Saskatchewan continuing to pay equalization payments as “have” provinces, while their economies continue to suffer due to low oil prices. Starke argues that Kenney had a chance to change the program when he was in Ottawa and didn’t.

“The Alberta Revenue Agency would essentially be an agency that would collect all tax revenues in Alberta, rather than have them sent to Ottawa and then wait for the money at some point to perhaps be distributed back. It’s something that has been recommended in past reviews of equalization; Quebec does it in that format.”

When it comes to Nelson’s strategy to get the Conservatives back in power, he’d rather see the Tories get back on their feet and earn back the votes lost in the 2015 election than throwing away two existing parties. Between 2012 and 2015, the PCs lost nearly 154,000 votes, the Wildrose lost almost 81,900 and the NDP gained more than 477,000. Nelson says they need to first understand what happened before they can recover.

“We had lost touch and got rather arrogant… and we got away from understanding and connecting with Albertans. I was a candidate [in the May 5, 2015] election and I wondered if we would cease to exist… and we realized very quickly that our members weren’t going anywhere… and the base support for the party wasn’t going anywhere.”

He admits that base support isn’t enough, but Nelson sees the party getting back in touch with average Albertans. The Calgary lawyer plans to do that by hitting the pavement and meeting and speaking with as many constituents as possible.

“There’s only one way to do it, in my mind, to lead to a PC government, is to get to every community, every constituency, every person you humanly can to touch base, and not only talk about the plans, but listen and connect with those people. That’s how I see us going forward.”

While working with the Wildrose wouldn’t hurt, Byron sees Rachel Notley winning a second term if the two unite, as he argues there isn’t enough time to do it successfully before an election is called.

Delegate selection has already been done in Grande Prairie – Smoky, but GP – Smoky’s meeting is set for February 11th. Delegates will vote on March 18th in Calgary.