There were over 600 teddy bears collected at the Grand 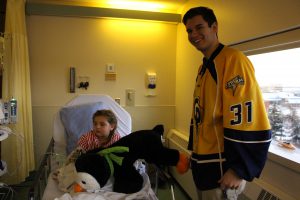 e Prairie Storm game over the weekend. Over 1200 people attended the game at Revolution Place on Saturday December 3rd and were able to toss a teddy. After their first goal, the team collected roughly 30 large bags of bears that fans had thrown onto the ice.

The players spent their Monday morning giving the stuffed animals to sick children at the QE II hospital. People who attended the game brought toys to the game while Petsmart also provided the animals for purchase at the arena.

The Storm lost the game Saturday against the Mustangs. Calgary took the win with a score of 5-3.