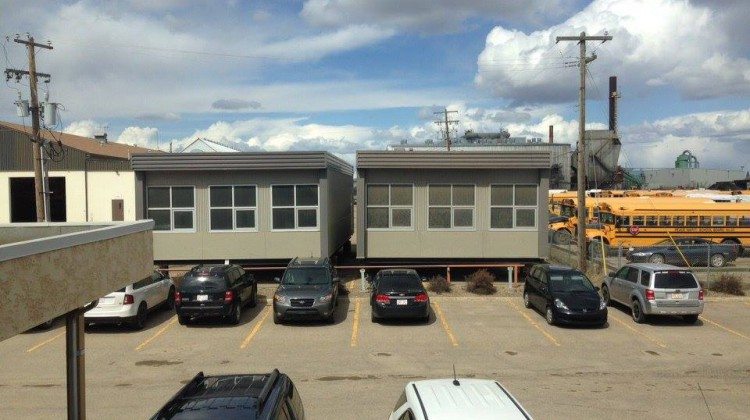 New modulars for Harry Balfour brought in in 2015

It’s now clear that the annexation of County land by the City at the beginning of 2016 has not affected Peace Wapiti School Division. Superintendent Sheldon Rowe says they’ve only seen enrolment in brick and mortar schools drop by six students this year. He thinks only one family in the city’s new rural service area changed districts.

“This minister’s decision to provide transportation to families which are currently attending Peace Wapiti schools was a big factor in maintaining those families with us. In addition, I would think over the years as new families move in, those new families will be attending Grande Prairie city.”

There are about 100 students who stuck around, and Rowe expect their younger siblings to attend Harry Balfour and get funded for transportation. He adds that given the economy, they thought people would be moving out, but it’s apparently families in the area are staying around.

While some schools like Spirit River Regional Academy are down in numbers, others saw a major increase. Rowe says an additional classroom of 28 joined Sexsmith Secondary, and Harry Balfour is still overflowing with more than 800 students.

“The net result is that it’s quite tight. However, we are addressing that with the construction of the Whispering Ridge school, and we hope that sometime late fall next year we’ll have that opened and operating, which will mean both Harry Balfour and Whispering Ridge will have some space.”

PWSD added two more ECS or kindergarten classrooms to Harry Balfour this year, bringing the total to six. Three portables were added last year, but there’s nowhere to connect them so children have to go outside to access them.

Rowe says more are on the way, as this year’s kindergarten enrolment across the district was 503 children, while the graduating grade 12 class will be about 469. PWSD also saw an increase in alternative programming like online and distance education, so overall it’s up by about 20 students.