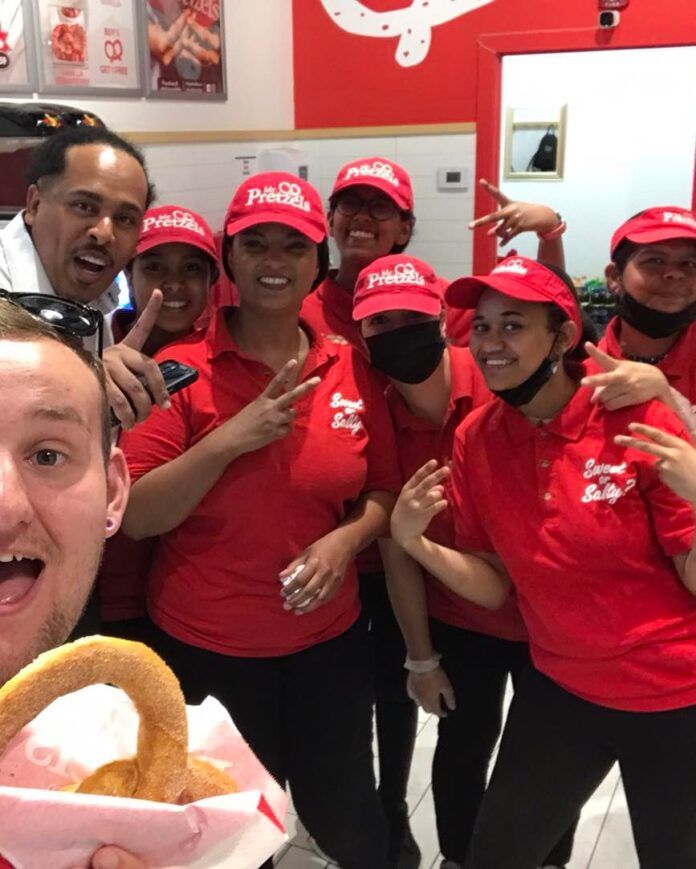 I started my week by going out to Saskatoon Lake and the campground. They have a day use area and a great place for shade. The lake was beautiful and I wish I could have stayed longer!

The Market in Hillside was my next stop. This event happens every Thursday from 11 a.m. to 8 p.m. As always there was freeze-dried candy and the Frontier Outpost was cooking up burgers. They also had ice cream. Every time I go out to the market it get more pretty!

On August 12th, it was the one-year anniversary of Mr.Pretzels in the Prairie Mall. I went to the mall to congratulate them and I got a free cinnamon and sugar pretzel. I could eat them all day!

It was time for me to head to the event of the week, Bear Creek Folk Fest. I got there when everything was just getting started. The amount of people there was amazing as well as seeing all the different communities come together and hear the amazing lineup of artists. I was most excited to see Serena Ryder.

On the other side of the park, there was the 1st annual Rubber Ducky Race. They had a bunch of activities like a dunk tank and face painting. There was only 1,000 ducks to be sold and 525 got bought.

August 13th was the Buff Up for Babies car show. It was in the Jackpot Bar and Grill parking lot. All of the proceeds went to the Labor and Delivery Unit for the GPRH. There was a truck that had a ton of sparkles. Taking a picture of it did not do it justice!

After looking at all the cars I headed out to Clairmont to the Clairmont Community Garden Society BBQ. I had no idea what to expect but wow I was blown away when I got there. It looked so lush and green. I can’t wait to go back there and pick some tomatoes. Bandaged Paws was out there with puppies to be adopted.

It was time to head to Minors Allowed Bingo. I always get excited when I get to go to the legion. The people there are so nice and this time the bingo hall was packed. Later on that night they were having an open mic night. Next time they have one I will definitely have to go.

On August 14th I cruised on out to Open Farm Days at Country Roads RV Park. There was live entertainment and a corn maze that I did get lost in.

After getting out of the corn maze I drove on down to South Bear Creek Park for the Medicinal Plant Walk. This walk was about learning about the weeds and plants in your backyard and how they can help you out when you are sick. It was very educational, and Ila was the leader who knows her stuff.

To end my week I went back to the Bear Creek Folk Fest. It was a nice sunny day and each stage was being used. I could not have asked for a better week.