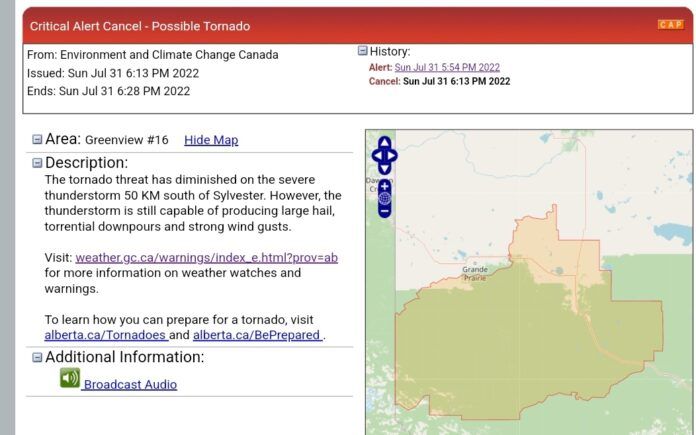 “Conditions are favourable for the development of thunderstorms this evening and overnight. Some of these thunderstorms may become severe in nature and capable of producing strong wind gusts, large hail, and heavy rain.”

UPDATE #3: The severe thunderstorm warning for the MD of Greenview has ended.

UPDATE #2: The possible tornado alert has been cancelled. Environment Canada says the tornado threat has diminished. However, the thunderstorm is still capable of producing large hail, torrential downpours and strong wind gusts.

A critical alert for a possible tornado has been issued for the Municipal District of Greenview.

Environment and Climate Change Canada says that as of 5:50 p.m. Sunday, a rotating severe thunderstorm that is possibly producing a tornado is located 40 kilometres south of Sylvester in the County of Grande Prairie and is moving southeast at 30 kilometres per hour.

People in the area are told to seek shelter immediately in a basement or reinforced structure.

“Get low and put as many walls between yourself and the storm as possible. Stay away from windows, doors and outside walls. If you are on the highway and cannot avoid the tornado, seek shelter in a ditch or ravine.”

A tornado warning is also in effect for the MD of Greenview near Wapiti and Shuttler Flats Recreation Area. It’s noted that damaging winds, large hail, and locally intense rainfall are also possible.

“This is a dangerous and potentially life-threatening situation. Take cover immediately, if threatening weather approaches.”

Tornado warnings are issued when imminent or occurring thunderstorms are likely to produce or are producing tornadoes.