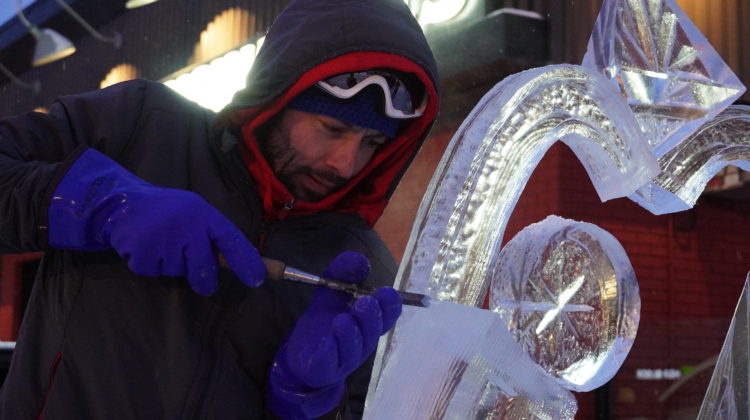 Cliff Vacheresse working on his craft with Ice on Whyte. (Lincoln Ho)

The Grande North Winter Festival in Grande Prairie includes an ice carving competition, featuring world-renowned ice carvers from the Ice on Whyte Festival. Cliff Vacheresse, head carver in Grande Prairie and lead carver for all outreach programs says that things got started in 2003.

“We’ve been running for about 20 years now. It started with a single artist placing ice carvings along Whyte Avenue in Edmonton. The festival has evolved into a rather large event and represents one of three carving competitions for the Canada Cup of Ice Carving.”

The Ice on Whyte Festival has received numerous awards and honours, including being named one of the world’s 10 best ice festivals by World Atlas, a top 10 winter festival in Canada by Reader’s Digest, and the winner of the 2012 Alberta Pride Alto Award from Travel Alberta.

Vacheresse says the festival has seen steady progression as it continues to get recognized locally, provincially, nationally, and internationally.

“When I started working with the festival in 2011, Ice on Whyte had already become world-renowned for several years. We have continued to gain traction and more recognition has started to come our way in recent years, which is nice because it has evolved into a premier sculpting festival, not just an ice festival.”

Since 2014, the Ice on Whyte Festival outreach program has brought them to different communities outside of Edmonton every year.

“It really depends on the year and how busy we are. When things are a little quieter, we typically visit five communities per year. The busiest we get involves us participating in about ten other communities in a year, big and small,” he says.

Vacheresse adds that Ice on Whyte also provides instruction for anyone interested in learning about ice carving.

“We run what we call the L’il Chippers program. We bring some special ice out with us and cut it up into more manageable pieces for beginners, provide tools, tables, and a little bit of beginning instruction just to make sure they get a feel for it.”

The competition gets underway on January 14th outside Bonnetts Energy Centre from 3-9 p.m. Locals will vote for their favourite ice sculptures, and the winner will be announced on Sunday. Tickets are $10 to watch the competition in the ice garden.