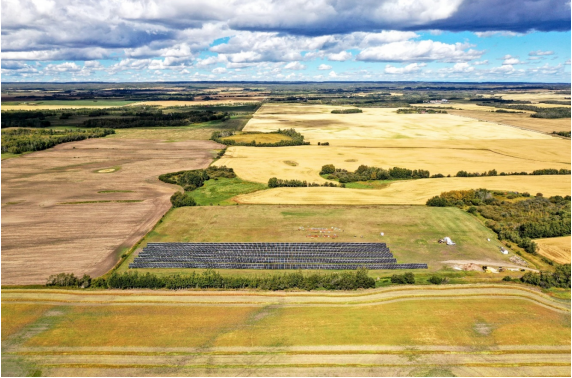 Sexsmith Mayor Kate Potter says a full year of operation of the municipally run solar farm has provided more than just a reliable, sustainable source of energy, with the economic aspect of the project already paying off.

The operational report, released on Wednesday, states that in addition to reducing GHG emissions 466 tonnes/CO2E, the project has also netted the town a $20,000 surplus within the last 12 months.

Potter says the farm generates enough energy to cover about 70 per cent of the power needs for the town’s 30 municipally owned and operated buildings, and finding ways to create more sustainable energy sources is likely to be a continuing discussion.

“It’s sort of emboldened us to say what else could we do, we are talking about the potential of a new multi-purpose facility, [and] maybe we build solar right onto the building,” she says.

“So that right from the get-go, it’s built into the cost of the building and we then we get that benefit.”

Potter says as it’s built on the site of a no longer used landfill, the solar farm seemed a perfect opportunity to create positive change on a parcel of land that would normally sit barren.

“You can’t put houses, or buildings… you can’t run even recreational things where people spend a lot of time on the land because of the reclamation and what it was used for,”

“So, solar panels, a great way to use that space that can’t be used for other things,”

Potter says while there are no formal discussions, she is hopeful the results of the first-year operational report will drive more development like this across the County of Grande Prairie in the not too distant future.

“Everybody waits for one person to sort of jump off the cliff and survive, and in our scenario, we can thrive,” she says.

“It gives me great hope when I think of the potential regionally when it comes to doing more of this,” she adds.

The solar farm cost approximately $1.8 million to build and has been operational since November 2020.