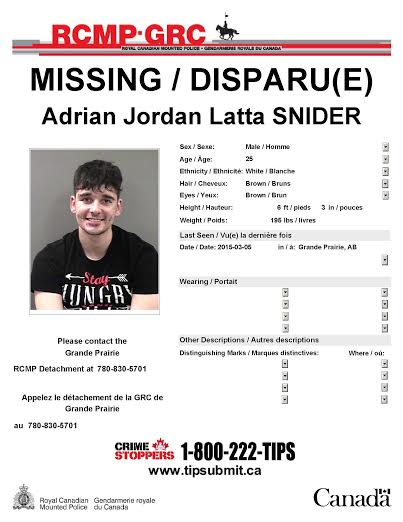 UPDATE: Police are still actively searching for Snider’s remains, and Corporal Roy Kennedy says they are confident they will locate them.

UPDATE: Grande Prairie RCMP says Patrick Decque was arrested at his home Friday night and Dominic at a shopping mall in town Saturday. A third person was arrested but was released without charges. They are still looking for more suspects in the case.

Two people have been charged in connection with the homicide of 25 year old Adrian Snider. 27 year old Dominic Decque and 29 year old Patrick Decque were in Grande Prairie court this morning on murder charges.

Snider was reported missing at the end of March, after he hadn’t been heard from since the 6th of the month. RCMP began investigating his disappearance as a homicide, and have search a home in the east end of Grande Prairie, and a rural area.

The two accused remain in custody, with their next court date set for May 25th.