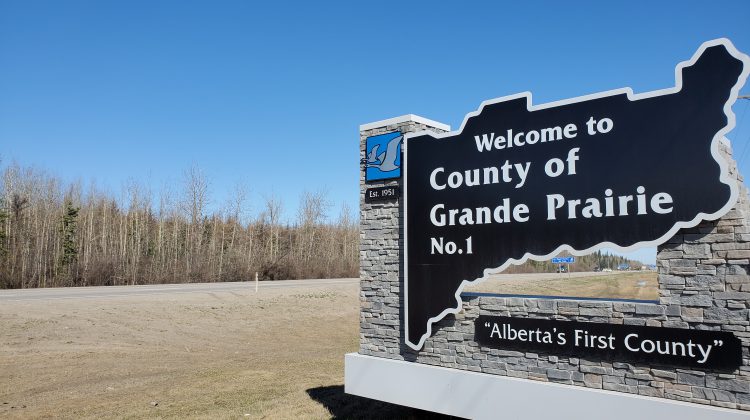 A sign in the County of Grande Prairie (Erica Fisher, MyGrandePrairieNow.com staff)

County of Grande Prairie Reeve Leanne Beaupre is pleased to see progress when it comes to unpaid taxes owed to rural municipalities from the oil and gas sector.

This, after the provincial government proposed amendments to the Municipal Government Act that would allow municipalities owed overdue property taxes to use a lien on oil and gas companies, which could help force them to pay.

As of January 2020, Beaupre says the county was owed approximately $2 million. She adds having any kind of leverage will make a big difference, as tax revenue covers a fair share of costs around the region.

“The only instrument of raising revenue is by tax and assessment, and that pays for the operations and the capital investment… a lot of our other revenue comes from grants, some sale of services from the county, but it’s very minimal,” she says. “The majority of our revenue raised to provide infrastructure and programs is taxes.”

Beaupre says in the last 18 months, the debt owed to the county has shrunk considerably, but the number remains in the six-figure range. She adds the majority of the oil and gas operators in the region, as well as industry partners are paying their taxes, it’s what she calls a ‘few bad apples that have had issues in the past either with insolvency or simply choosing not to pay their taxes.

“More concerning is those who choose not to pay their taxes but continue to operate, and this is going to send a clear message that there will be some mechanism or instrument that we will be able to use that financially obligate them to pay their taxes

Earlier this year, a Rural Municipalities of Alberta survey stated $245 million in property taxes owed to 69 rural across Alberta. The proposed amendments to Municipal Government Act have yet to be voted on in the legislature.