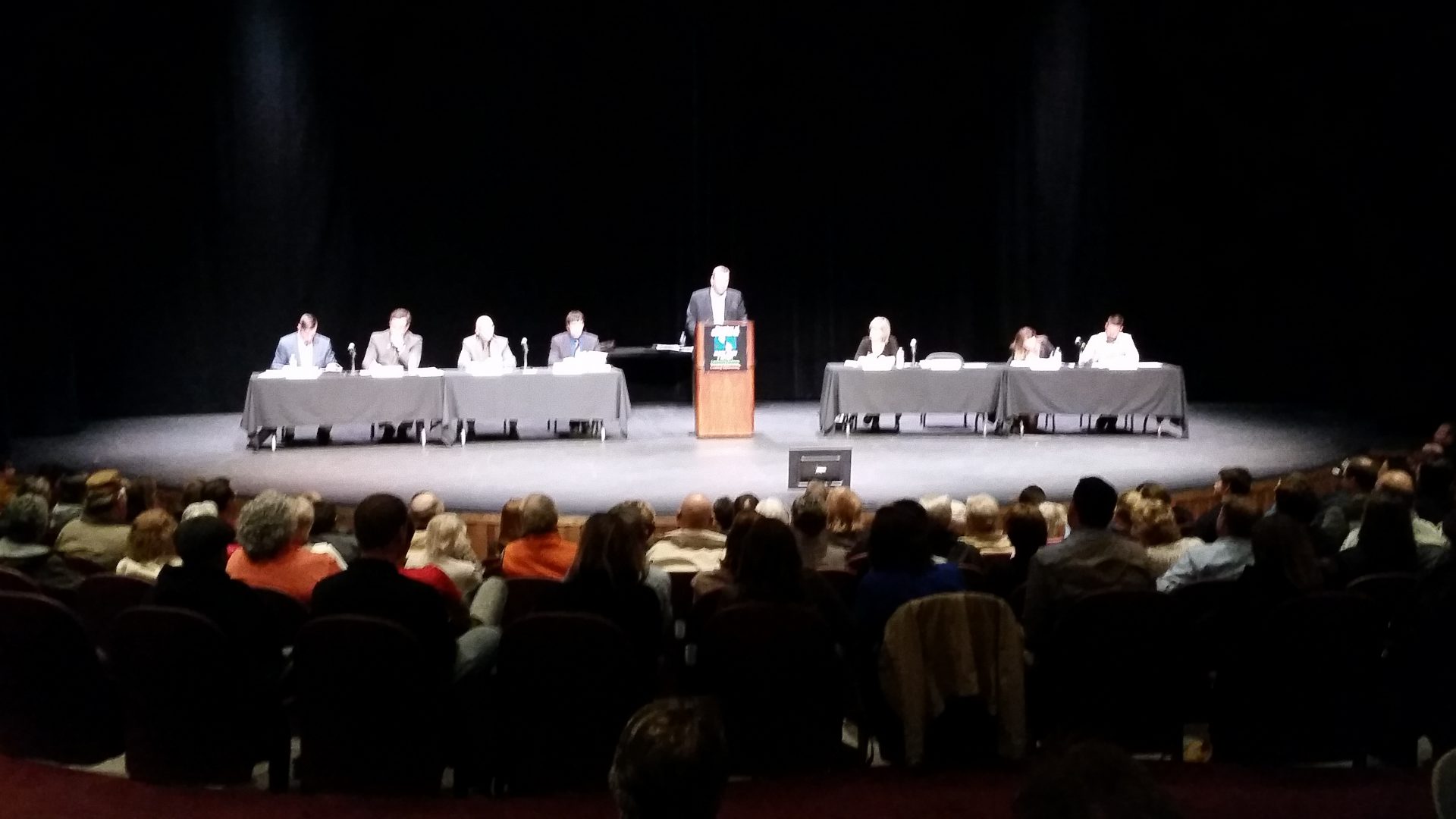 Roughly 450 people came out to the Grande Prairie All Candidates Forum last night, with even more watching an online stream. They got to hear the representatives for both area ridings speak on topics like FCSS funding, post-secondary education, and protecting the environment.

Here are some of the highlights:

Q: What would you and your party do to bring out stronger government transparency?

Mary Dahr, NDP – “The NDP doesn’t take contributions from corporations… if you’re only taking contributions from individuals, you’re not owing any corporations; you’re not trying to hide anything that you’re doing.”
Rory Tarant, Alberta Party – “When it comes to transportation and infrastructure, we currently don’t know what the criteria is for building new roads and twinning. We’ve seen a lot decisions being made politically and not based on need.”
Wayne Drysdale, PC Party – “Rory, good comments, but they’re not that close to the truth. We do have a real transparent system and your numbers, I’m not sure where you got them.”
Todd Russell, NDP – “We can guarantee the NDP will never cross the floor to one of those two parties. It hasn’t happened, it won’t happen; we don’t need a rule in place to try and stop it.”
Laila Goodridge, Wildrose – “The Wildrose is going to stand up and create more accountability and more transparency in government spending.”
Todd Loewen, Wildrose – “Presently there’s a Sunshine List that exposes the government employees that make over $100,000 a year and their expense accounts, but it doesn’t include the government-funded agencies, bureaus, commissions, and Alberta Health Services, so we would like to expand that Sunshine List so that Albertans know where the money’s being spent.”
Kevin McLean, Liberal – “Anything over $10,000 for a contract would be open for public to see who got the contract.”

Q: What are your plans for funding education and our province’s future?

WD – “In Alberta we have an excellent education system, probably one of the top in the world, and it’s also the best funded education system in the country.”
KM – “They will eliminate the school fees, this is hard on young children and we need to change this. As well, we also offered full-day kindergarten once we balanced the budget.”
LG – “We will eliminate mandatory school fees; families already pay for education in their taxes.”
RT – “We’re proposing a one per cent increase to the large corporate income tax rate, which provides an extra $5 million a year, which covers the increase for the growth in student enrolment.”
TR – “We all see that there’s an issue with revenue, save for one party: they think it’s an issue with math.”

Q: What is your party doing to engage voters?

KM – “That’s why a strong opposition is very important in Alberta. We haven’t had a very strong opposition for years.”
TR – “For tonight’s forum, it was our request – my request – to have this live streamed, so they can try and engage the audience that does want to engage through electronics, through sitting at home on their computer.”
RT – “One of the best ways to engage younger voters and people that are typically not in the voting demographics is to really engage them on the mediums that they use, and the biggest one is social media.”
LG – “It was Brian Jean, the leader of the Wildrose Party, that actually got me involved in politics.”
Everett McDonald, PC Party– “When you’re trying to engage voters, start with the children. I travel around my constituency every year to all the grade six classes I can get to and talk to them about why it’s important to have a voice.”
MD – “I think years and years of the same Conservative government, people thought, ‘why should I vote? It’s just going to be the Conservatives.'”

Q: What is your position on the tax rates that have been increased this budget?

KM – “The Alberta Liberal Party has spoken out against the health premium tax increase… and camp fees.”
WD – “We haven’t increased the taxes in Alberta since 1987, and that’s why we have to increase them today. Everybody says increase corporate taxes, and they think of big oil companies… 95 per cent of corporations are small business.”
TR – “We must raise revenues, but let’s be clear: there’s a big difference between small business and corporations. There’s a different tax rate as well.”
LG – “When it came time to present their budget, a budget that they called, ‘getting things right,’ all they did was raise taxes and take on massive debt. They never said who was responsible for getting things wrong in the first place.”
RT – “The Alberta Party would repeal a lot of those taxes that really are affecting the bottom line of household budgets.”
MD – “If I have to pay $1,000 more a year, I start to think, am I using $1,000 worth of services?”
EM – “We need to have a balance. It has to work in partnership with those that are paying and those who are receiving. We need to make sure that it’s affordable for all.”

Voters head to the polls May 5th.