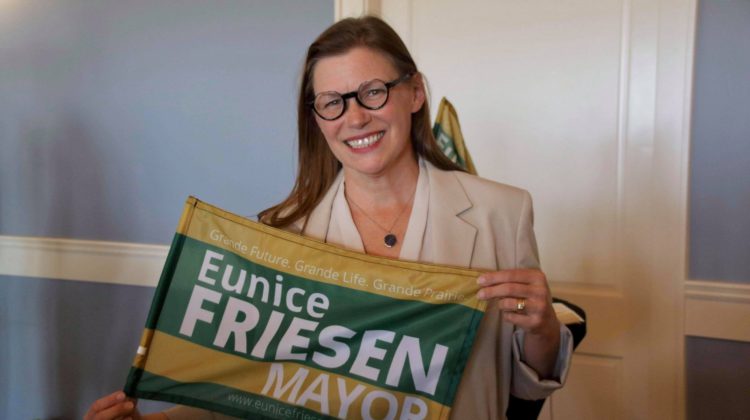 Billing herself as a community leader and not a politician, Eunice Friesen is running to be mayor of Grande Prairie. The current city councillor announced her bid to an excited crowd at Bear Creek Funeral Home Tuesday night.

A one-term councillor, Friesen says the last four years have been an eye-opening experience as to how things run at city hall. She feels, however, that a steady hand is what the municipal needs coming out of an unprecedented time, something she believes she can provide.

“What we’ve been through over the last year and a half, in particular, it’s been a wild ride with our economy, socially, and COVID-19 restrictions we’ve undergone, it’s unsettled our community,” she says. “I do bring an experience and a stability I think residents will appreciate.”

Before stepping into the public service sector in 2017, Friesen, among other things, founded Bear Creek Funeral Home in 2013. She believes the hurdles she faced set her up for success not only as a member of city council but to be the chief elected official in the city.

“Nine years ago, in the face of a lot of people saying it’s not possible in this community, there is an engrained provider and it’s just not possible,” she says. “The work that I did has redefined the standard of the industry in Grande Prairie… and I’ve done that in a few different roles I’ve and that is where I succeed the most, creating that change and making a meaningful shift from what was to what will be.”

“I managed a line of business for a publically traded oil field services company; I get what drives the economy of the Peace Country.”

As of July 20th, Friesen joins Jackie Clayton and Bryan Petryshyn as the only publicly announced candidates for the mayor’s race in the City of Grande Prairie. The 2021 Municipal Election falls on October 18th.