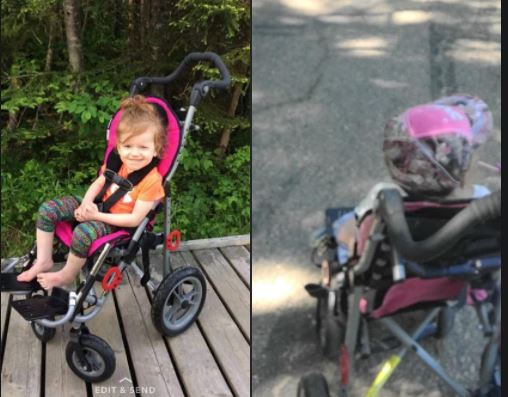 A mother in Grande Prairie is reaching out to the public for help finding her daughter’s stroller. Mother Denika Smith says she has been left heartbroken after hearing the pink and black stroller was taken Saturday night. She says she left the stroller at her daughter’s respite house in Cedarwood the day before.

“I woke up, and I was like I cannot believe it… My heart’s broken. What kind of person would do this?” she adds.

Smith says the stroller plays a vital role in her daughter’s life and has to last her until she is at least 16. Smith says her eight-year-old daughter suffers from Spastic Cerebral Palsy, and the chair is the only way she can maintain mobility.

“When we go for walks, I put her in it when we go to the park and long distances,” she says. “It’s breaking my heart that somebody took her mobility away.”

Smith hopes they can find her daughter’s stroller. She says her daughter has appointments coming up at the Stollery Children’s Hospital and needs the stroller to bring her to them.

Residents in the community have been reaching out to help find the stroller after Smith put out a social media post on Tuesday.