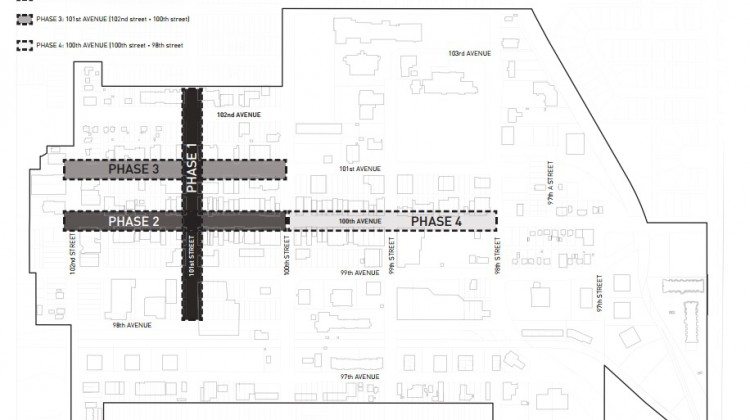 City Council will receive their first option for how to spend $20 million on upgrades to Grande Prairie’s downtown next week.

A plan has been developed by city administration to spend that money, which Senior Land Use Planner Stuart Wraight says will cover the first four phases.

“At the moment it’s identified for 2016 to start and [we’re] hoping to have phases one and two complete then and move on to probably phases three and four in the same year, or potentially in 2017.”

The initial plan, according to Wraight, was to have construction start later this year but even with an immediate endorsement from Council he says there are still too many steps between now and a potential ground breaking.

“We still have to go through a detailed design phase to discuss matters such as the street furniture and if there’s going to be a theme, and we’ve certainly heard from the Downtown Association that they would like to see some sort of identity or brand with the actual street furniture and what is being planned for the downtown area.”

Wraight says the project has the potential to continue beyond the first four phases with continued funding, but right now they will start with renewing the subsurface infrastructure and streetscapes of 101 Street (phase 1), a portion of 101 Avenue (phase 2), and then 100 Avenue (phases 3 and 4).