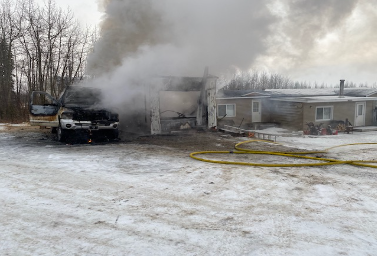 The aftermath of the garage fire in the County of Grande Prairie. (Supplied, County Regional Fire Service)

An investigation is underway after a garage fire near the Hamlet of Huallen. County of Grande Prairie fire crews were called to the blaze on Range Road 92 north of Township Road 720 shortly before 4 p.m. Sunday afternoon.

Fire officials say they found a detached garage fully engulfed in flames, which had spread to a pickup truck next to it. The flames were also melting the siding of the home, but firefighters were able to prevent it from catching fire.

No one was injured in the response.