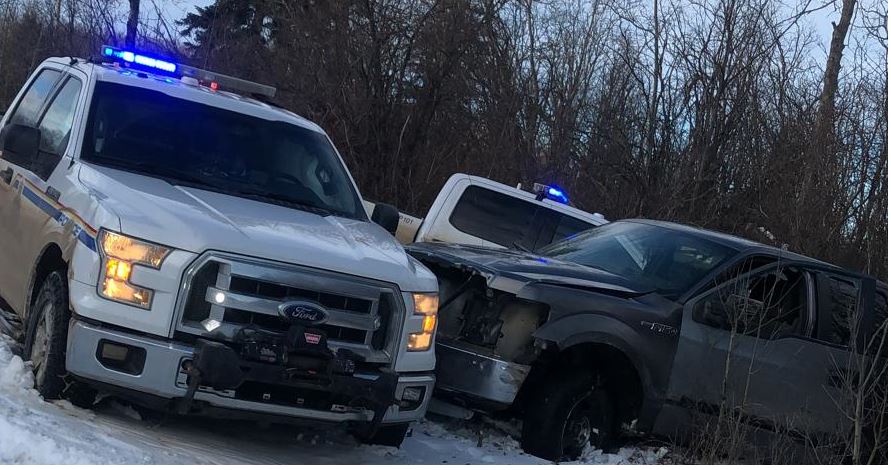 Several police vehicles have been damaged in the arrest of a wanted man. Beaverlodge RCMP says the suspect was spotted on the Horse Lake First Nation just before 11 a.m. on Christmas Eve, noting he had 16 outstanding warrants for his arrest.

Mounties say the 40-year-old is a known offender with a history of violence against police and one of his warrants was for assaulting an officer with a weapon. It’s alleged the man was driving and sped out of the community towards Highway 43 and didn’t pull over for police.

The chase reportedly moved into the Spirit River area where officers from multiple detachments tried to stop the vehicle. A device used to deflate tires was set up on a dead end lease site road.

There, the RCMP alleges the suspect’s truck was used to ram several police cruisers, damaging three to the extent that they couldn’t be driven. Mounties say the man then fled onto Highway 49 where his truck was forced off the road by officers.

Police report the suspect then tried to steal a member of the public’s vehicle but wasn’t able to and was arrested with the help of a police dog. He was taken to hospital in Grande Prairie for treatment and then to the RCMP detachment. It’s reported no officers were injured during the incident.

Angus Byron Ferguson is facing 13 criminal charges stemming from what happened on December 24th, including flight from police and four counts of assaulting a police officer with a weapon. Ferguson remains in police custody and is scheduled to appear in court in Grande Prairie on January 4, 2021.