Highway 43 budgeted for significant repairs in 2021 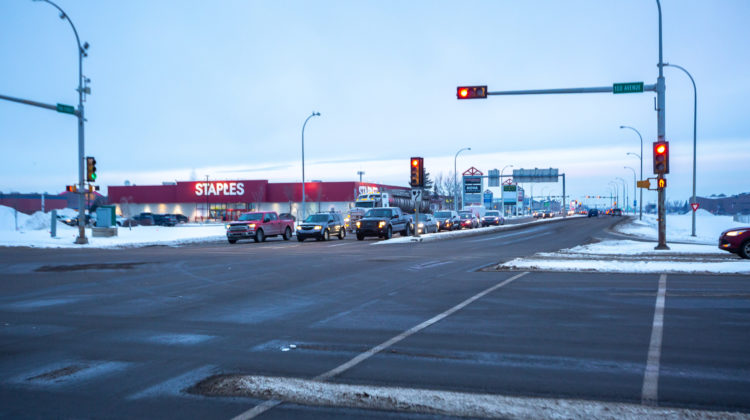 The City of Grande Prairie has budgeted a total of $6 million in 2021 for repairs to Highway 43 going north from the "Staples Intersection" past Ernie's, to the city limit. (John Watson, MyGrandePrairieNow Staff)

Highway 43 will be getting some much-needed upgrades in 2021, as City of Grande Prairie Council has budgeted $6 million for the project. Mayor Bill Given says the city has heard residents’ complaints about the road and recognizes the need for significant repairs.

“Residents have regularly over the last number of decades said that road [needs] to be improved. We have an opportunity to do that using money that is there and doesn’t have an impact on capital tax,” he says.

Given says city administration is still doing detailed studies and planning for the 2021 construction season, but thus far has a pretty good idea of where residents can expect the road to see repairs next year.

“We had heard from staff that the intention was to start at essentially what we would call the ‘Staples Corner’ and head north past the college, past [the] Ernie’s intersection, and north towards the city limits. So it’d be that sort of north leg of the old bypass.”

Where the money will come from will be split, with $3 million coming from Municipal Sustainability Initiative funding, and $3 million from a provincial grant. Councillor Dylan Bressey says the project is one he wants to see completed as quickly as possible, given its frequency of use.

“I think fixing up a bypass that is long neglected by the province is a painful process because it’s such a main artery for our city,” he says. “If you’re shutting down the bypass, I want to get as much of it done as possible at once.”

Councillor Wade Pilat, however, wants the project to be addressed over a longer period of time. He is concerned about the total amount the city is spending on roads, compared with what contractors are able to accomplish in a given season.

Instead, he has suggested removing $3 million from the Highway 43 rehabilitation budget to be transferred for use in future years. He says it’s not that he doesn’t want to spend money on the road, but that he’d rather move it to somewhat stabilize the city’s spending.

“Three million can still do a fairly large section of the road, and I just think we have to be very careful about how much paving we’re going to put in the budget,” says Pilat.

A motion put forward by Pilat during budget discussions to remove $3 million from the Highway 43 rehabilitation budget was ultimately defeated by city council by a vote of 7-2.