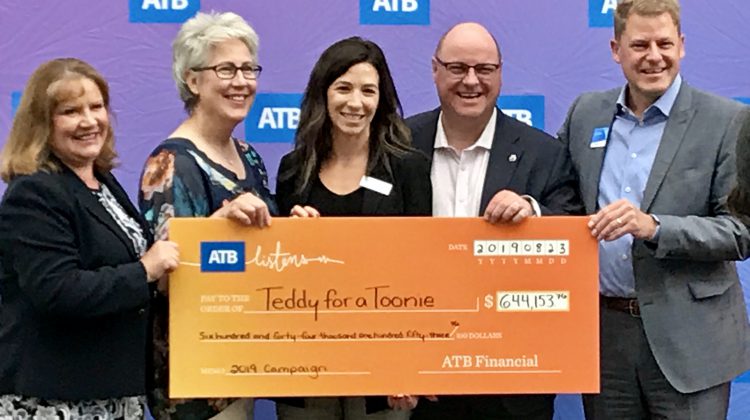 ATB Financial’s Teddy for a Toonie Campaign is wrapping up its 21st annual run and looking to raise as much as they can for the Stollery and Alberta Children’s Hospitals. According to ATBs Stollery Ambassador, Charlene Johnson, the Grande Prairie market has been the number one fundraiser in Alberta.

Johnson says like any other fundraiser and event, COVID-19 has changed the game and how it’s played. The annual event was moved from May to October, she adds she doesn’t suspect donations will match or exceed that of previous years, but every little bit counts.

“We recognize that we’re not going to come close in Grande Prairie to what we made last year. Right now we’re sitting at around $17,000.”

“We are just very happy that we are even at the $17,000 mark right now. The generous donors in this community have certainly stepped up in spite of COVID-19… the generosity in this community is just amazing,” she says.

The funds being raised in this year’s campaign are primarily concentrating on Pediatric Mental Health Care in the Emergency Department. Johnson says the two children’s hospitals are working with 50 doctors across Alberta in developing a standardized system to treat children’s mental health impairments. The aim is to minimize wait times and improve communication with families.

Similar to last year’s fundraiser, the Grande Prairie branch planned to raise money through a murder mystery type event but had to cancel due to ongoing COVID-19 concerns. Instead, an online silent auction was held, which concluded October 23rd, and are currently in the final stretch of selling raffle tickets.

The 20th anniversary Teddy for a Toonie fundraiser in 2019 saw approximately $56,000 raised in the Grande Prairie area.

Johnson says especially considering the challenges brought about by COVID-19, maintaining and treating mental health is becoming more important than ever.

“Mental health, especially in children now, is the number one priority that Alberta needs to have and we need to ensure our children have access to the best care possible,” she says.

Collectively, ATBs Teddy for a Toonie campaign crested $10 million in total donations last year to the children’s hospitals since its inception.