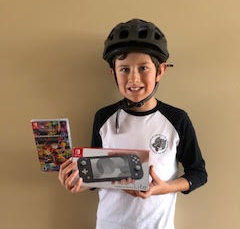 One lucky winner in Grande Prairie has gone home with a Nintendo Switch Lite and Mario Kart 8 Deluxe. The City of Grande Prairie Enforcement Services awarded the system to Alexander Timanson after his name was drawn at the end of the Positive Ticket Program.

The program was relaunched this summer to encourage children and youth to practice safe, community building habits. Enforcement Services Operational Support Supervisor Shawn Hibbert says it was run by the City of Grande Prairie for some time before Enforcement Services took over.

“Previously… it was with the Crime Prevention department. This year, it was the first year Enforcement Services really pushed that program forward,” he says.

Hibbert adds, typically, the program involves peace officers, specifically on the bike unit, going around the community and commending children and youth for partaking in safe summer activities.

When they are seen getting involved in safe activities, they are issued a “positive ticket” which could be redeemed for a small “swag bag” of summer doodads such as bubbles and chalk and an entry to win the grand prize.

The grand prize was kept a tight secret within Enforcement Services. Hibbert says the team wanted to “spice up” the competition in the debut year of restarting the program.

“We were thinking that it’d be a nice surprise to be regarded for something that you’re doing that’s positive in the community,” he says. “To have even the positive ticket in and of itself is cool.”

A total of 29 positive tickets were issued. Alexander was recognized for setting an example for others on how to properly wear a helmet and promoting positivity and safety within our community. Hibbert says the program is something he would like done annually.