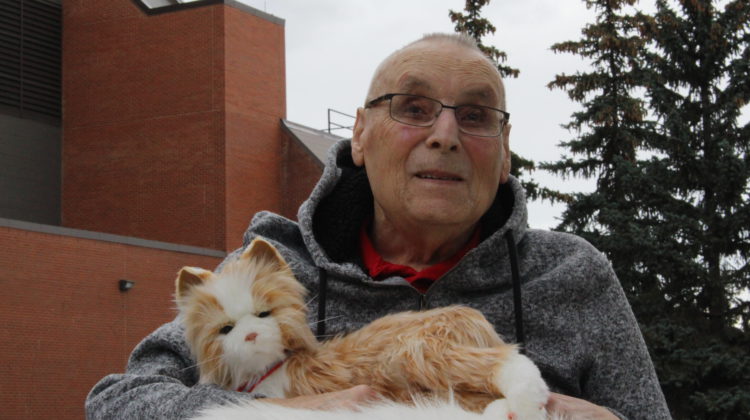 A plush cat has given a Grande Prairie man suffering from dementia a new lease on life, and, according to his daughter, a renewed sense of hope, determination, and love.

“She is a sweetie pie… and she is very cuddly,” says Bruno Sagmeister. “I’ve had cats all my life, but she is a special cat.”

The cat in question is a robotic, soft tabby, aptly named Sweetie Pie. The friendly feline was brought into Bruno’s life by his daughter Suzanne Sagmeister earlier this month.

After suffering a stroke following open-heart surgery in 2017, Bruno was diagnosed with Vascular Dementia. After losing his wife to cancer in 2019, he was moved into the Mackenzie Place Continuing Care Centre on a full-time basis.

Suzanne says she gifted the cat to bring some cheer into her father’s life but the outcome has been far greater than expected. He has only had the cat for a few days, and, in that time, she believes the animal has provided a major boost to his cognitive function. 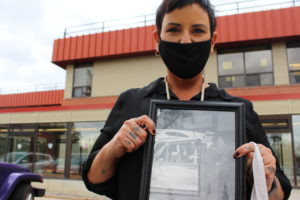 Suzanne Sagmeister with a photo of her father in his paramedic uniform (Michael Lumsden, MyGrandeprairieNow.com staff)

Thanks to a career in policing and emergency services, Suzanne says her father has had a lifetime of schedules and stringent time management. However, now with his new pet in the picture, those days may finally be behind him.

“He gets up [as if] to go to work every morning, but he said he thinks he is going to retire now… [he said], ‘she deserves better than to be left alone.’ So, he’s going to be staying home from work now and looking after the cat.”