One man in custody after more than $400K seized in drug bust, one still at large

Grande Prairie RCMP have arrested one man and issued a warrant for another after the seizure of a considerable amount of cash and illegal drugs.

He has been released on significant cash bail and will make his next court appearance on March 25.

Charges have also been laid against 35 year old Arte Abdillie Jama (pictured), who goes by the street name “Fresh”.

Police are asking for the public’s assistance in locating Jama.

If anyone has information regarding his whereabouts they are asked to contact RCMP or Crime Stoppers. 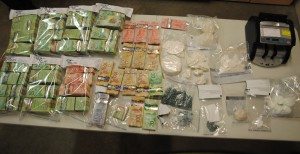