Police in Whitecourt have arrested a wanted Grande Prairie after he made several attempts to evade capture.

RCMP say they were investigating a complaint of a possible impaired driver parked in the middle of a bridge outside the community on Thursday when they found 29 year old Bradley Duff.

After an altercation with officers Duff took off in the vehicle, only to be found about 5 kilometres away.

While attempting to bring Duff into custody with the help of RCMP Air Services Duff caused damage to an unmarked police truck and two police cruisers, narrowly missing several Mounties who were on foot.

Duff rolled his vehicle and fled into nearby trees where he was captured with the help of Police Dog Services.

RCMP say the truck the and a snowmobile it was hauling were both stolen.

They also found a loaded .357 magnum handgun, a high powered rifle, a flare gun altered to shoot shotgun shells, 33 grams of what they believe is methamphetamine, assorted drug paraphernalia, and several stolen chainsaws.

Duff is now facing 36 charges including assaulting a police officer, evading police, resisting arrest, possession of stolen property over and under $5000, illegal possession of firearms and ammunition while prohibited, mischief, breach of probation and recognizance, and driving while disqualified.

His first court appearance is set for March 10 in Whitecourt provincial court. 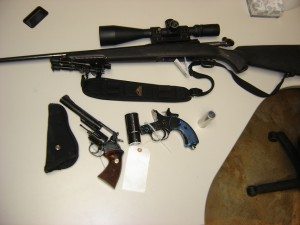