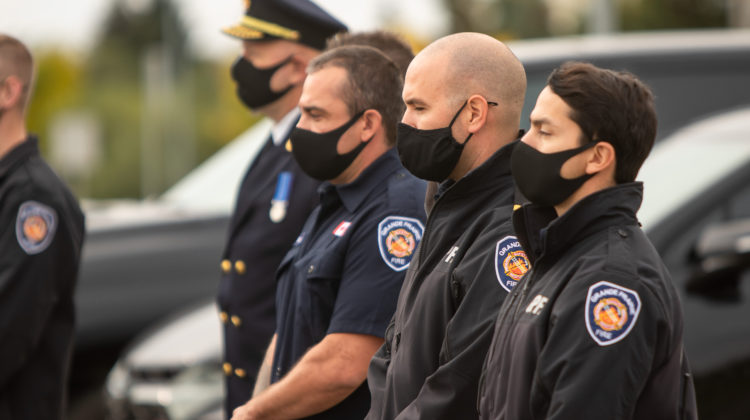 Members of the Grande Prairie Fire Department stand at attention as Fire Chief Preben Bossen speaks during a ceremony to remember those who have fallen in the line of duty. (John Watson, MyGrandePrairieNow Staff)

Local first responders gathered Sunday morning to commemorate the 19th anniversary of the September 11th terror attacks on the World Trade Centre, and Pentagon buildings in the United States. Grande Prairie Fire Chief Preben Bossen says since the event happened, first response departments have evolved to recognize more risks and hazards present in their line of work, as well as those who have suffered from other causes and ailments.

“We lose members ongoing from some of the different threads in the industry, so it’s about remembering [them], but it’s also about awareness around safety and some of the challenges we have in our jobs,” he says.

“Out of what happened I think we have recognized the challenges with exposures and cancers so now we try to avoid the exposures as much as possible.” 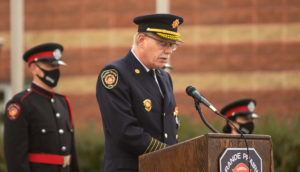 Bossen adds mental health challenges many firefighters experience in the line of duty are also finally being recognized and addressed. Peer support teams and support staff are included among measures being taken to confront potential stresses and traumas.

Equipment cleanliness has also become a priority for fire teams. Bossen says the risks and dangers of continuing to use contaminated equipment is now an important concern for active teams.

The memorial itself consisted of a speech from Bossen, with an Honour Guard to each shoulder, addressing present members of the Fire Department. A prayer was spoken for the fallen, and the sound of a bell was rung to “Signal them home.” This was followed by a moment of silence to pay respects to those who have died in the line of duty.