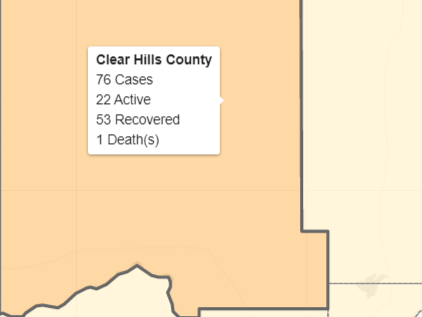 Clear Hills County has seen a sharp spike in COVID-19 cases after four days worth of testing data was released by Alberta Health Services on Tuesday. 18 new and 19 recovered cases of the virus were reported over the four-day stretch from September 4th to September 7th, pushing the totals in the region to 22 active and 53 recovered cases.

Saddle Hills County, meanwhile, has seen its first case of COVID-19 reported by the province. The single active case comes more than six months since the first case of the virus was reported in Alberta.

Two new and seven recovered cases of COVID-19 were reported in the City of Grande Prairie, for a new total of 11 active and 77 recoveries. The Rehoboth Christian Ministries Northridge Group Home has also been added to the province’s list of outbreaks.

The MD Of Fairview has seen four new and seven recovered COVID-19 cases reported over the long weekend, for a new total of six active and 10 recovered.

Across Alberta, 619 new cases of COVID-19 were reported as of September 7th from more than 45,000 tests, as well as five deaths outside of the North zone. The province says 154 of the cases were reported on Friday, 171 on Saturday, 137 on Sunday, and 157 cases on Monday. Provincially, there are now 1,692 active cases of COVID-19. Overall, Alberta has a COVID-19 recovery rate of over 91 per cent.