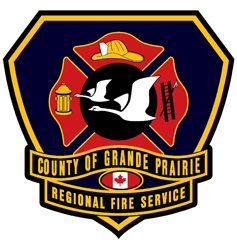 UPDATE: Emergency crews have dealt with a natural gas leak that was responsible for the evacuation of multiple businesses in the Clairmont Industrial park last night.

The county’s fire crews were called to the scene around 6:20 yesterday evening and shut down a stretch of 69 Ave between 96 St and 98 St.

Evacuees from nearby businesses were allowed to return to work after air quality in the area had been tested and deemed safe.

County fire crews are currently at the scene of a gas leak in the Clairmont industrial park.

The leak was caused by a forklift hitting a natural gas line in a commercial building on 69 Ave between 98 and 96 Streets.

Firefighters have secured the area and workers in adjacent buildings have been evacuated.

There have been no injuries reported.