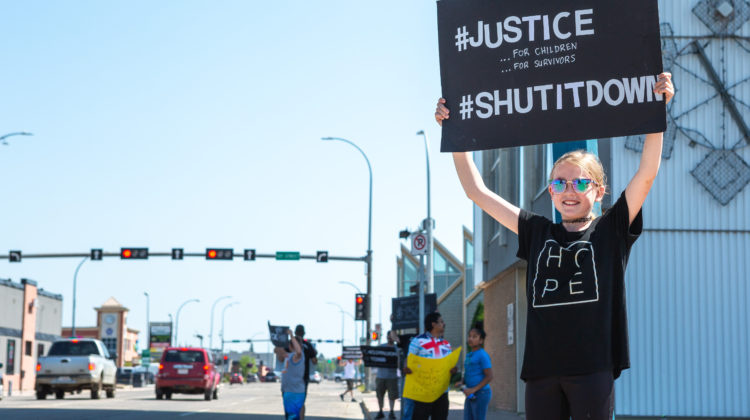 A Grande Prairie woman is hoping to create a bigger conversation surrounding the human trafficking industry. On Thursday and Friday, Tiffany Giesbrecht, her children, and several concerned residents took to the downtown core to protest in the spirit of World Day Against Trafficking in Persons.

She says after discovering several campaigns online and armed with a familiarity of some who have been victims of trafficking, she felt the need to speak out.

“It’s a sensitive topic. I know of young girls who are vulnerable, who have been lured into trafficking situations here [in Grande Prairie], who are really close to home, who were trafficked at a young age,” she explains.

“It’s not just something that happens in third world countries overseas,” Giesbrecht adds. “It’s happening here in Canada, so we’ve been trying to understand what we can do; what are tangible things we can do to make a difference” 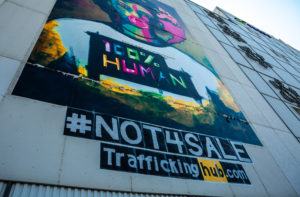 A “#NOTFORSALE” note has been added below the “100% HUMAN” mural on the side of the Telus Building in downtown Grande Prairie. It was added to recognize World Day Against Trafficking in Persons, which occurred on July 30. (John Watson, MyGrandePrairieNow Staff)

Doug Schweitzer, Minister of Justice and Solicitor General, says human trafficking is continually an area of discussion and an industry the provincial government is working to shine a light on.

“It’s one of those areas where it’s so important that we continue to raise awareness around it,” he says. “We brought in legislation around human trafficking that brought in further provisions that help make it easier for people to file complaints against those who do human trafficking, making it easier for law enforcement to get warrants and everything they need to monitor these situations when they’re developing.”

For those who are suffering from sexual assault, sexual abuse, crisis or trauma, the PACE centre is a resource to access skilled, caring and professional supports and services.