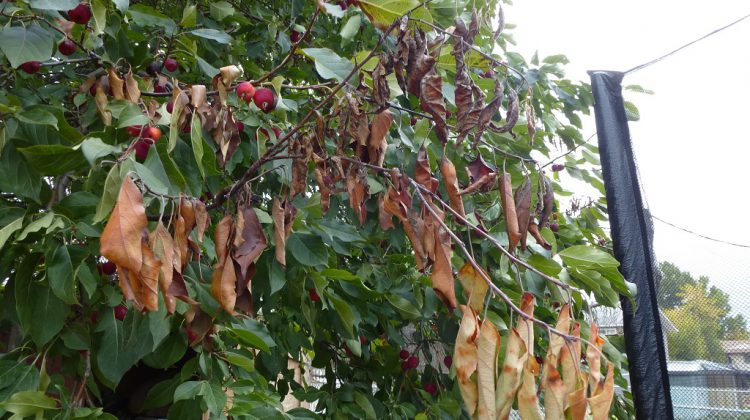 An example of Fireblight disease. (Supplied, City of Grande Prairie)

The City of Grande Prairie is reminding residents to inspect any trees on their properties due to the rampant spread of the bacterial disease known as fireblight. Integrated Pest Management Technicaion Ian Hof says 2019 was particularly bad for a disease that doesn’t usually find its way into the region, and it has the potential to set the stage for another very damaging year.

“Last year was terrible— last year was the worst outbreak Grande Prairie has ever seen,” says Hof. “Due to that, the bacteria overwinters on branches, so there was a high concentration of fireblight on the trees from last year’s summer.”

Apple, pear, hawthorn, and mountain ash trees are most vulnerable to the bacteria. Symptoms will include browning and death of new growth as well as sudden cankers spreading down shoots and branches of dying leaves. Hof says that fireblight must be controlled wherever it is found.

“It’s legislated, so we have to do everything we possibly can to take care of it,” he says.

To combat fireblight, all branches showing symptoms must be pruned 12 to 18 inches below the infection. Pruning tools should be disinfected with a 10 per cent bleach solution to prevent further spreading.

Hof says that elm aphids are also beginning to reach outbreak populations in the region. Although they pose no risk to plant health, they are a pest in the sense that they will cover the ground in layers of sticky honeydew.

“They’re usually quite specific to a host. You can get spruce aphids, pine aphids, elm aphids— there’s almost an aphid for every species of plant,” he explains. “The problem is the aphids [secrete] this sugary, sticky solution called honeydew onto people’s cars, driveways, sidewalks, and it’s messy.”

Being soft-bodied insects, the City says a viable solution to help control populations is to regularly spray local elm trees with a high-pressure garden hose. Doing so is said to wash away much of the residual honeydew from the leaves without hurting the tree, as well as destroying many of the aphids residing there. Additionally, hosting space for ladybugs to breed is supposed to naturally help control aphid populations.