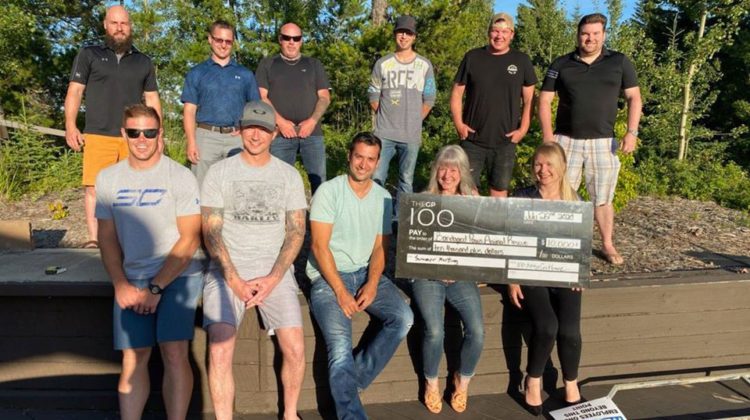 Bandaged Paws received a cheque for $10,000 from the GP 100, Wednesday night. The other candidates at the first GP 100 meeting since the start of the pandemic were the Imagination Library, and the MS Society, which each walked away with $500 for coming out to share their stories. (Bandaged Paws, Facebook)

The GP 100 has chosen Bandaged Paws Animal Rescue Association to receive a donation of $10,000. The group selected Bandaged Paws at its first meeting since restrictions had been imposed on social gatherings due to the COVID-19 pandemic.

Bandaged Paws was one of three charity organizations that petitioned the group for donations at Wednesday’s meeting. Imagination Library and the MS Society of Canada also presented, and received a $500 donation.

Board member Cole Murphy expains each member is given a poker chip to cast their vote on which should receive the influx of funding.

“The way the charity works is, we facilitate a platform for three charities to come in, talk about what they do in the community, how they do it and what they would do with the donations,” says Murphy. “We learned a lot about Bandaged Paws; we learn a lot about this charity every time they come in. They have a 15-minute time slot to tell [us] about what they’ve done and how they’re doing it.”

Natasha Arsenault, president of Bandaged Paws, says she is grateful for the extra funding, especially given the massive influx of animals coming into the shelter due to the pandemic.

“We’re seeing a very high number of kittens this year, we’ve taken in almost 600 animals in 2020 alone so far, so our numbers are just exploding with the [number] of people who are requesting help from us,” she says. “Like any non-profit right now, the struggle with COVID and fundraising and donations has really put a hindrance on what we’re trying to do.”

Arsenault adds Bandaged Paws will use the funding to bring back some of their staff, which in turn will allow them to bring in more animals, as well as use some of the money to cover vet bills for those that require it.