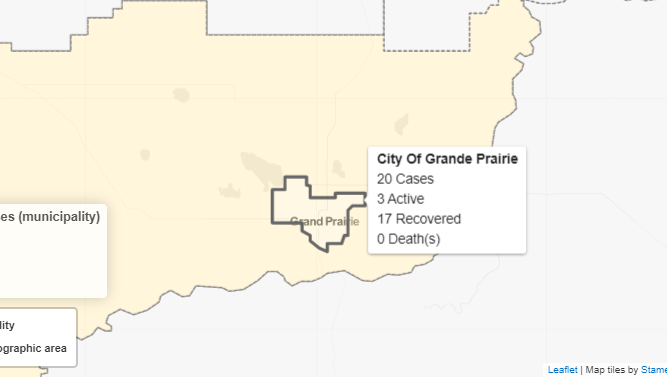 The City of Grande Prairie has confirmed three new cases of COVID-19 since Friday.

Three new cases of COVID-19 have been confirmed within the City of Grande Prairie since Friday. Alberta Health Services says there are now three active and 17 recovered cases.

The County of Grande Prairie has added two cases, bringing its total to three active and seven recovered. Meanwhile, the Municipal District of Fairview has confirmed its first active case.

Elsewhere, Clear Hills County has added two cases, bringing the total of active cases to four, while the County of Northern Lights also saw two cases added for a total of three active.

In Big Lakes County, five of its active cases are now considered recovered, and there are three active cases remaining. In the AHS North zone, there are 53 active cases, including one hospitalization. The death toll has also increased by one, the first in Mackenzie County, which is under provincial watch for potential additional health measures.

Across the province, 230 cases have been confirmed since the previous update on Friday. An additional 25,132 tests have been completed in the same time period.