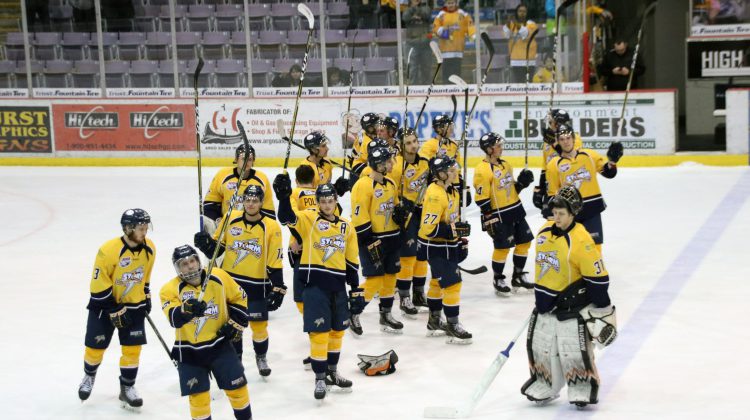 Members of the Grande Prairie Storm salute the crowd during playoffs in 2019 (Erica Fisher mygrandeprairienow.com staff)

Grande Prairie Storm’s 2020/2021 regular-season schedule has been released, but much of the logistics of playing hockey this fall is still unknown. At this point, the regular season is slated to kick off on the weekend of September 18, 2020 with the Fort McMurray Oil Barons coming to the Swan City for back-to-back games.

However, Alberta Health regulations currently prohibit indoor gatherings of more than 100 people, preventing a large crowd. Storm Vice-President Chris Millsap says they don’t know what September 18th will look like, and if things don’t change for the better, it’s the team’s expectation that they simply won’t be able to host games.

“We are not in a position where we have the luxury of being able to play without fans, so if we can’t safely get people into the building, we economically won’t be able to operate,” he says. “We’re sticking with this schedule right now on the hope that the social distancing guidelines will be loosened to the point that we can get 2,000 people into a building”

Millsap says if those guidelines get loosened, and they’re allowed to host a full house of fans, the team must do its part in keeping patrons safe.

“We have every expectation that’ll probably require masks by all individuals who attend, and we are already taking steps to provide season ticket holders with masks free of charge, and we will have masks available to anybody else who attends.”

He adds the health guidelines affect more than just paying customers, as they also face restrictions when it comes to team personnel and players.

“There is a limit on the number of people who can be on the ice, who can be in dressing rooms and that sort of thing. As far as what that’s going to look like in August, we don’t know yet, but obviously we and the rest of the league will be following very closely what Alberta Health guidelines are.”

The Storm is set to play three of their first five games at Revolution Place.