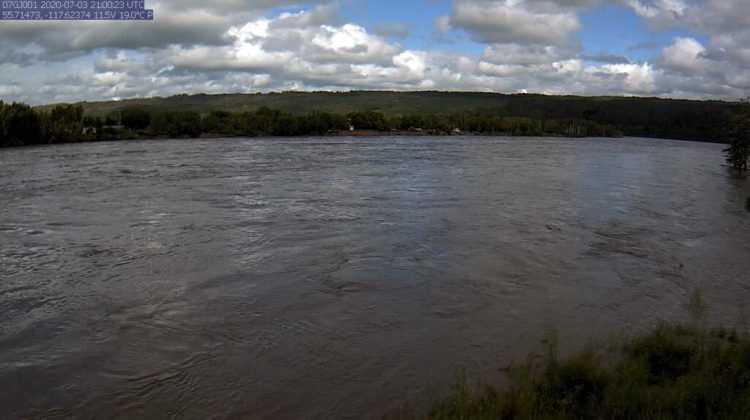 UPDATE #2: Birch Hills County rescinded the order to evacuate and state of local emergency for the Hamlet of Watino and surrounding low-lying areas.

Officials say the water level of the Smoky River is showing a slow decline and has receded over the past 24 hours, though the water level is still high and fast-moving. Residents are warned that banks are unstable in many areas.

UPDATE: The flood warning has been downgraded to a flood watch. Officials with Central Peace Regional Emergency Management say water levels on the Smoky River at Watino stabilized overnight Friday into Saturday.

However, the mandatory evacuation order remains in place for the Hamlet of Watino and nearby low-lying areas due to high water levels. The order will remain in place until the stability of river banks and roads can be established, according to officials.

Officials with The Central Peace Regional Emergency Management Agency are telling people to evacuate immediately and report to the reception centre at Tangent Community Hall.

“The safety and well-being of our residents is our number one priority,” says Birch Hills County Reeve Gerald Manzulenko. “This declaration will allow us to effectively manage this emergency.”

Anyone needing transportation to evacuate is asked to call 780-814-0530. People in the area are also warned to be aware of areas known to flood easily like streams, drainage channels and canyons.

“Please stay safe, stay away from river edges, and low–lying areas and watch for updates from the County and CPREM,” adds Manzulenko, noting enough staff are in place to monitor the situation.

A flood warning is in effect for the Smoky River at Watino in the Peace River Basin. Alberta Environment and Parks says water levels have risen five metres at Watino and additional rises of up to two metres may be possible before the river peaks between July 4th and 5th.

It’s also noted that the estimation and timing of the peak may be affected by unknown contributions from the Wapiti River since the gauge has malfunctioned due to the high flows. This gauge is expected to be serviced on July 4th.