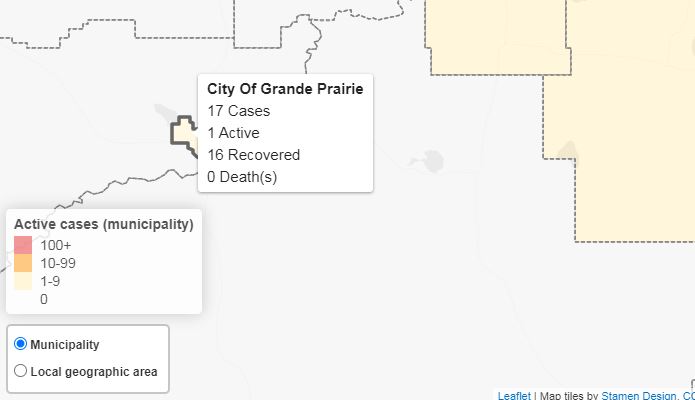 Alberta Health Services has made some adjustments to the number of COVID-19 cases in the Peace Country. It has removed two of the recovered cases from the City of Grande Prairie, leaving it with one active and 16 recovered cases as of July 1st.

In Big Lakes County, the data shows two less recovered cases, giving it one active and 33 recovered cases. Three recovered cases have been removed from the Municipal District of Greenview, leaving it with just one recovery.

At the same time, five recovered cases were added to the Municipal District of Smoky region, leaving it with one active and 61 recovered cases. The only other active case in the area is in Clear Hills County.

Officials with Alberta Health Services have previously explained that cases can be rezoned into a more accurate geographical zone.

Across Alberta, 94 new cases were recorded on Tuesday and Wednesday, as well as a death in the South zone. Numbers weren’t updated on Canada Day.

Chief Medical Officer of Health Dr. Deena Hinshaw says a particular increase has been seen in positive tests for residents aged 20 to 39-years-old.

“In the last month along we’ve seen

In the AHS North zone, there are 34 active cases, with four people hospitalized and one in intensive care. More than 14,800 tests were done over the last two days.