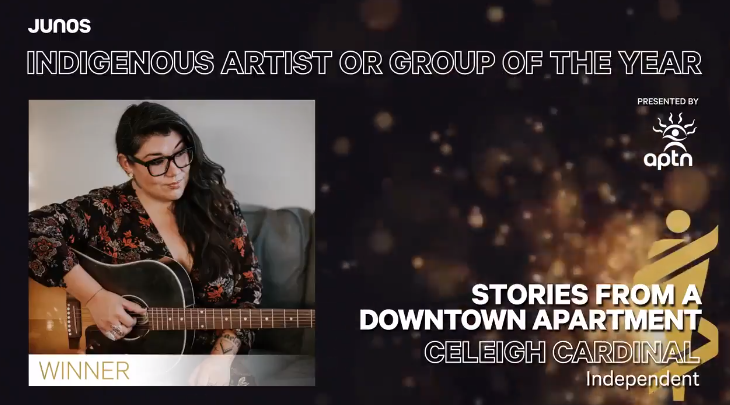 Grande Prairie’s Celeigh Cardinal has been named 2020 Indigenous Artist or Group of the Year at the 2020 Juno Awards. It’s the first nomination and victory for the singer, who received critical acclaim for her 2019 release “Stories from a Downtown Apartment”.

Cardinal, who now lives in Edmonton, packed the Grande Prairie Live Theatre for two performances in January and took part in the Indigenous Iskew+ in Leadership Symposium.

Cardinal tells Mygrandeprairienow.com that she is still in a bit of a haze after the victory, and it doesn’t feel real just yet.

“As a Canadian artist, especially from northern Alberta, the Junos are the award, that’s the end game, that’s what you’re shooting for,” she says.

“All these years of doing this, and I’m finally in that place where I got the thing I’ve been aiming for my entire life, it’s insane.”

It, unfortunately, wasn’t the same result for the two other Peace Country artists who were nominated. Grande Prairie’s Tenille Townes and Spirit River’s Aaron Goodvin walked away from the ceremony without any hardware. Townes lost out to the Lennon Stella for Breakthrough Artist of the Year, with Alessia Cara getting the nod for Songwriter of the Year.

Goodvin, meanwhile, was edged out for Country Artist of the Year by Meghan Patrick.