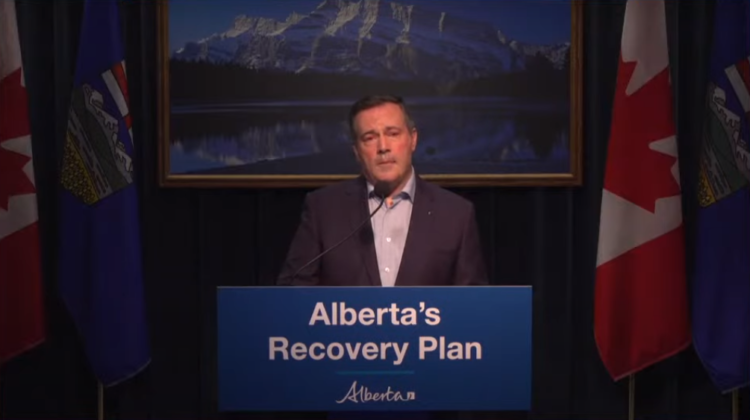 Kenney announced the Alberta Recovery Plan, with $10 billion available for everything from new roads and bridges to new long-term care homes, new schools, hospitals, and drug treatment centres. The Premier says this plan is the largest infrastructure investment in Alberta’s history.

“Albertans have risen to the challenge of the pandemic, though we will continue to be careful, especially for those who are most at risk. Now we must extend that same culture of resilience to overcoming the greatest economic challenge of our time. Today, we take a big step forward in that journey with the launch of Alberta’s Recovery Plan, a bold, ambitious long-term strategy to build our province, to diversify our economy, and to create jobs,” says Kenney.

Kenney says this infrastructure announcement represents a 40% increase over what had initially been budgeted for in the province’s current capital plan.

“Altogether, this plan represents a bold statement of confidence in the future of Alberta. It is based on common sense, not ideology,” he adds.

It’s estimated this recovery plan will create 50,000 jobs “in every corner of the province”. Specific projects haven’t been announced yet.

In a major new initiative, the UCP government plans to launch a series of large-scale infrastructure projects this summer at a total cost of $612 million.

These strategic projects will be spread across Alberta and the government notes they will include the twinning of highways, projects that support growth in the agricultural sector, gas line extensions for northern residents, treatment facilities for Albertans recovering from addictions, and other important projects.

Kenney says it is critical the government take this action now to get the economy moving and people back to work.

“Right now in the face of the deepest jobs crisis in nearly a century, we must prudently leverage the province’s balance sheet to build, to diversify, and create jobs. If we don’t get people back to work, restore investor confidence, and get our economy growing again, the fiscal challenge will become insurmountable”.

Grande Prairie—Wapiti MLA and Finance Minister Travis Toews says while the Grande Prairie region isn’t immune to feeling the effects of the financial downturn, it is in a unique position when it comes to re-launch.

“We are fortunate to have not only a very robust energy industry but a strong agriculture and forestry sector, [as well as ] a related service sector here in the region,” he says.

“That certainly does provide us some buffer when we do see downturns such as we are experiencing now and compared to some regions which may only have one main industry in town.”

Also part of Monday’s announcement, the government is introducing an Innovation Employment Grant targeted to smaller companies and encouraging technology and investment in Alberta.

Kenney says the UCP government is creating the Cultural Event Relaunch Program to support music, performing arts and landmark events which have been especially hard-hit by public health measures.