One medallist to another: Grande Prairie student gets congratulations from Olympian 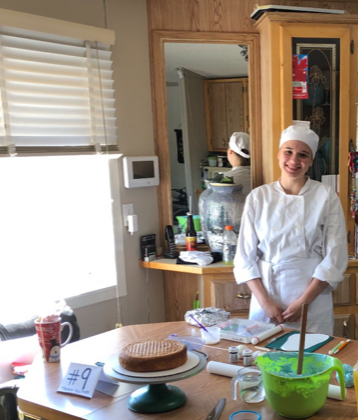 A Peace Wapiti Academy student got the surprise of a lifetime after beating out 15 other teens to win a gold medal for baking as part of the 2020 Skills Alberta Virtual Competition. Grade 11 student Madison Bulford took home the gold after designing, baking, and decorating a cake that displayed a dream catcher with strings of beads and feathers made out of fondant under the selected theme of Canadian Indigenous Art.

She then got a message of congratulations from Canadian Olympic gold medallist Justin Kripps.

“I’m still kind of in shock, and still can’t believe that I won,” Burford laughs.

In his message, Kripps, who won a gold medal in bobsleigh at the 2018 Olympic Games in South Korea, joked about how popular Madison’s baking skills must make her with her family when everyone is stuck at home, and how impressed he was with her dedication.

“It was definitely surprising and made me feel really good and supported… he could relate to all the time, effort, and practice that has to go into working towards a medal,” she adds.

Bulford says in the lead up to the competition, she felt nervous but says a switch seemed to flip once her time began. She adds she watches reality cooking and baking shows, but thought the time limits and pressure would have been too much for her.

“I didn’t think I would be that cool under pressure, but it wasn’t too bad. Once it started I think my adrenaline started running and I was ready to get it done, but it went very fast; it felt like maybe five or 10 minutes,”

The message of congratulations from Kripps to Bulford was made possible by RBC, which helps fund the competition.