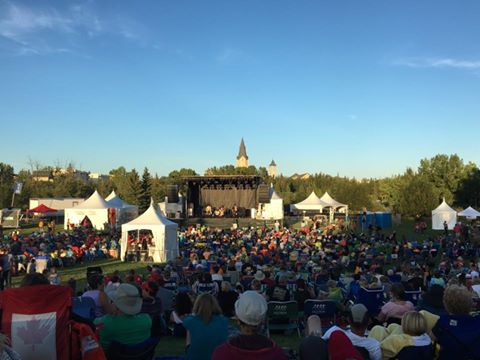 The Bear Creek Folk Festival in 2016 (Mayor Bill Given, Facebook)

UPDATE: Grande Prairie city council approved the funding for the Bear Creek Folk Festival and Grande Prairie BuckWild PBR at its meeting on April 6th. The normally $200,000 fund was cut in half this year.

The Bear Creek Folk Festival and Grande Prairie BuckWild PBR have been tentatively approved for a total of $100,000 from the City of Grande Prairie. As part of a recent Council Committee of the Whole meeting, members approved giving Bear Creek Festival organizers $75,000 from the 2020 Large Scale Tourism Grant Funding, with $25,000 going to the professional bull riding tour event.

Mayor Bill Given says, despite the COVID-19 pandemic, he feels it is responsible to continue with planned funding decisions, but with a caveat.

“That was a part of the discussion. Our council asked administration to follow up with organizers and find out what their contingency plans were and to provide council with information with how we could best safeguard that investment.”

Given adds, after being satisfied with those plans, approving funding was deemed the right decision, as they continue to try to plan for life after lockdown.

“I think there was a recognition that these events would be important to our local economy in any case. It would probably be even more important in a situation where we made it through the COVID-19 issue and trying to encourage economic growth.”

He adds there was also a willingness from councillors to consider allowing the organizations to have the funds so they could put them towards hosting either an event this year if that was possible, or potentially carry them over to 2021.

Other organizations that applied, but were ultimately rejected for funding, were the Teepee Creek Stampede and the Grande Prairie Stompede. The approved funding still requires the full vote of council at an upcoming meeting.

The grant applicants must be a non-profit organization hosting a ticketed, multi-day, rain-or-shine event with an attendance of more than 2,000 people per day. The event also needs to be held within the City or County of Grande Prairie. The Bear Creek Folk Festival is scheduled for the August 14th-16th weekend, while the Grande Prairie BuckWild PBR is slated to take place in October.