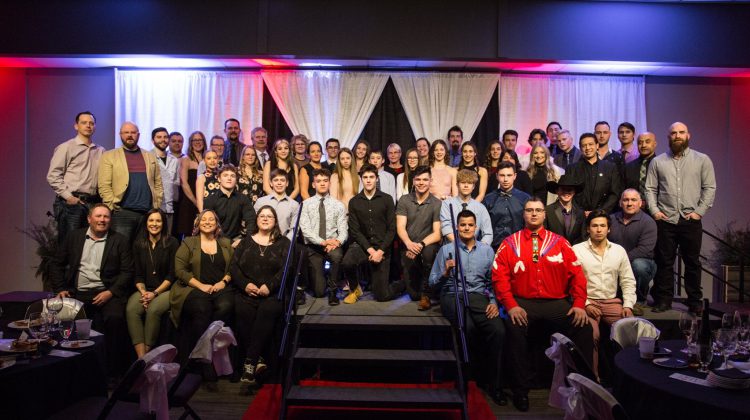 Champions of sport from across northwestern Alberta have been recognized by Grande Prairie Regional Sport Connection. It held its 6th annual Northwest Alberta Sport Excellence Awards March 6th in the County of Grande Prairie.

Below are the winners and their nominations:

Having competed as student and won countless medals, he decided to widen his knowledge by qualifying as an official in 2008. He has now achieved the level of First Class Canadian National Certified Competition Referee for both poomsae and kyorugi. He is currently training to receive his 5th degree black belt. Master Johnson continues to be a student of Taekwon-do, inspiring all of us to continue our own personal journeys. Alain has grown the club from its humble beginnings of 6 students to the 55+ students registered today. Students of all ages (5-60+), physical and mental capacities are made to feel right at home, part of the team, at the Road Warriors club in Donnelly, AB.

Team of the Year: Northern Lights U18 AAA Baseball Team

The Men’s and Masters Men’s Fast Pitch championships brought more than 6000 spectators, 300 participants and 100 volunteers together to celebrate the sport’s most prestigious national tournament. The event showcased the sport of fast pitch by bringing to Grande Prairie, some of the greatest players in the world and in doing so the attention of fans worldwide. The games were witnessed live by more than 6000 spectators in the stands and by 10s of thousands more online through online streaming. Spectators, participants, and game officials reveled of the event. This tournament was the most successful events in recent history for Softball Canada.

CJ began refereeing in 1995 in Grande Prairie and moved to Red Deer in 1996 to increase his opportunities. He has worked as a referee and linesman in the Alberta Junior hockey League and a linesman in the Western Hockey League. CJ also refereed at prestigious games such as; the Doyle Cup, Mackenzie Cup, and Pacific Cup. He has been on the provincial board since 2001 and is the Hockey Alberta Regional Coordinator and Officials Instructor. Since moving back to Grande Prairie he has continued instructing clinics in the region and province and continues his work on the provincial committee and as the regional coordinator.

Doug has been a dedicated volunteer of the Grovedale Figure Skating Club for 15 years, organizing test days for all skate clubs, Regional chair for peace region for the Alberta NWT Nunavut skate Canada section. Doug’s philosophy is to just get those kids on the ice having fun”,” we’re doing it for the kids”. Doug celebrates every child’s achievements it didn’t matter if they were just learning to stand on their skates or if they had done their first waltz jump. He has the true heart of a volunteer, dedicated to our club and to supporting the sport of Figure Skating in the peace country.

Over the past 4 years Krista has shown a passion and drive for developing a strong trail running Community. Not only has she developed the Thursday night trail running group but, she has also founded many local races throughout the years. These events have given back over $16,000.00 to local not for profit organizations. She gives selflessly of her time, and many weekends she can be seen supporting, encouraging, and cheering on many athletes during races. As an accomplished ultra-marathoner herself, she not only talks the talk, but walks the walk. She promotes movement and is an activist for bringing out the best in others.

Tara a gap in the amount of funding that was being provided to mental health locally in Grande Prairie and she chose to make a difference. She had an idea to run a hockey tournament with all proceeds going back to mental health in our community. She puts in countless hours for this tournament to be a success and her dedication is much admired. The first year this tournament raised over $11,000 and second year was just short of $6000. This money went into testing in the public schools for kids with Mental health that were previously on the waiting list for years.

We are so proud of all the 2020 nominees of this year's Northwest Alberta Sport Excellence Awards, and a BIG…