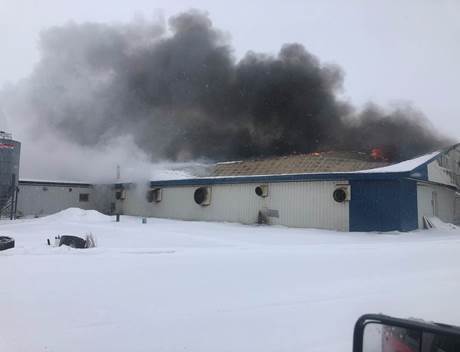 A fire broke out in this barn that houses pigs on February 11, 2020 (Supplied, County of Grande Prairie)

It’s not yet known how many animals have been killed in a barn fire in the Teepee Creek area, but firefighters say hundreds have been saved. The County Regional Fire Service was called to the blaze on Highway 674 between Range Roads 41 and 42 around 11:15 Tuesday morning.

When crews arrived, they reported seeing flames coming from the roof of one section of a barn that houses several pigs. Deputy Fire Chief Jason Nesbitt says firefighters from the County’s Bezanson, Clairmont, Dunes and Teepee Creek fire stations, with the help of their counterparts from Sexsmith and Wembley, were able to prevent the fire from spreading to the rest of the barn, as well as to nearby buildings. 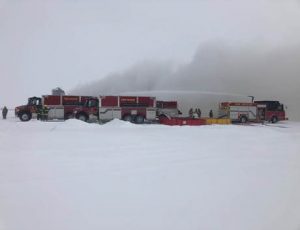 Because of the lack of hydrants in the rural area, a tender shuttle is being used to bring in large amounts of water. The County’s two new tenders that just started service this month are also being used to draw water from Teepee Creek using a nearby County-owned standpipe.

As of 4:30 p.m., firefighters remained on the scene, and it’s expected they would stay for several more hours. The cause of the fire is still under investigation.