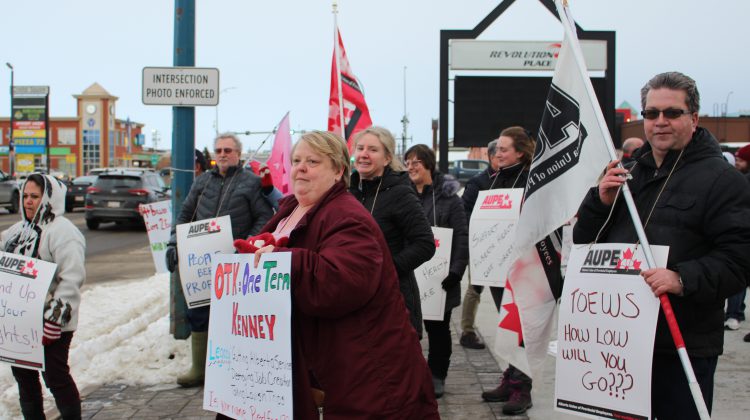 Members of the Alberta Union of Public Employees protested what they call cuts to education and health care outside the venue where members of the United Conservative Party were taking part in a meet and greet event. Around 50 turned out to Revolution Place Monday night to take part in the demonstration.

Licensed Practical Nurse Robyn Lothammer says she sees morale-sapping changes from potential cuts affecting her and other staff daily. She believes, at the end of the day, any major and tangible change would have devastating effects throughout the province.

“[Finance Minister Travis Toews) needs to realize what he is doing to us, what it’s going to do the whole economy, and how it’s going to affect all of us. Our wages, our health; he is cutting everywhere, and he doesn’t give a s*** what it is going to do to us.” 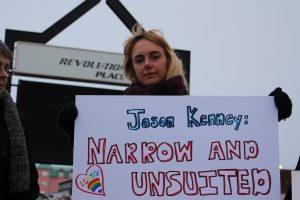 Earlier in February, results of an Alberta Health Services review were made public, with the panel suggesting upwards of $2 billion could be saved by reducing benefits and cutting some salaries. However, Health Minster Tyler Shandro stated he would not be looking to cut any rural or underused hospitals as a means of saving money, nor does he plan to cut front line services.

“Every dollar we save will be put right back into the health system to deliver on our promise to improve access and make the system work better for patients,” he said in a statement. “It’s about freeing up administrative resources so we can spend more directly on Albertans’ health care.”

Some members of the public sector, though, believe the government has done enough to help out the oil and gas sector, specifically through a four per cent corporate tax cut in 2019, which represents around $4.7 billion in tax relief. Child welfare worker Brad Tomniuk believes the government is now looking to pick up the slack on the back of public sector employees.

“It’s easy to do that when you give away billions of dollars to corporations and they don’t create jobs they said they would, you have to get the money somewhere, so you get it from your workers and people that need the services,”

Tomniuk says the austerity measures used by the current government remind him of the Ralph Klein era in the 1990s. Representatives for Shandro did not return requests for an interview.

Earlier Monday, members of CUPE staged a smaller protest outside of the Grande Prairie Legion, where Kenney was speaking to Grande Prairie & District Chamber of Commerce members. CUPE 787 President Randy Wald says they, too, are concerned about cuts to health care, education, and other services.